The “World’s Largest Music Festival,” Summerfest 2018 has its last day and evening of the year today and tonight along Milwaukee’s lakefront with great music and lots of fun all around! 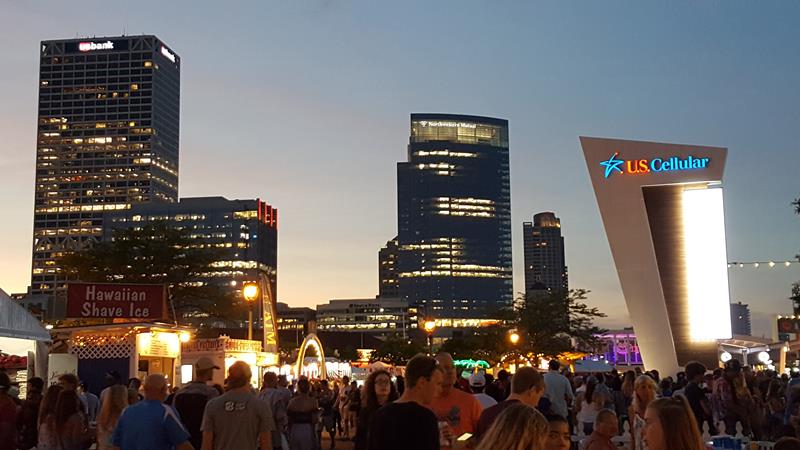 Part of Milwaukee’s skyline hovering above the northern part of the Summerfest Grounds, including the new US Cellular Connection Stage sign. The stage was completely redone for 2018.

Check the Event page for Summerfest for the rest of the lineups and activities.

Summerfest dates back to 1968 and has since become the backdrop for the music industry’s hottest stars, emerging talent and local favorites to create unforgettable live music experiences in a world-class festival setting. Running along Milwaukee’s lakefront nestled within downtown, Discovery World, I-794, and Lake Michigan, Summerfest 2018 offers not only music but over 45 food and beverage vendors, four marketplaces offering crafts and wares from all over the world, interactive exhibits, and just cool general fun.

Summerfest itself runs through today, July 8th. For future reference, tickets run $21 per day, but two discount options exist. One involves a “Weekday admission” ticket, which gets you in any time before 4pm weekdays and runs $13; the other is the 11-Day Power Pass. For frequent festival-goers (we average 9-10 days at this thing), the Power Pass is a great deal: $90, and you get admission each day. You can purchase and print tickets online here. Parking lots are available just to the west of the grounds and throughout downtown Milwaukee and the Historic Third Ward. The Milwaukee County Transit System also offers “freeway flyer” express buses to and from the grounds from numerous Park & Ride lots in the metro area.

The Summerfest Grounds can be accessed directly via I-794, U.S. 18, and Highway 32. I-43/94 and Highways 38, 59, and 145 also bring you within a mile of it – which is how far away some people park! Either way, Summerfest 2018 is one of the greatest music festivals on the planet and a definite State Trunk Tour recommendation.