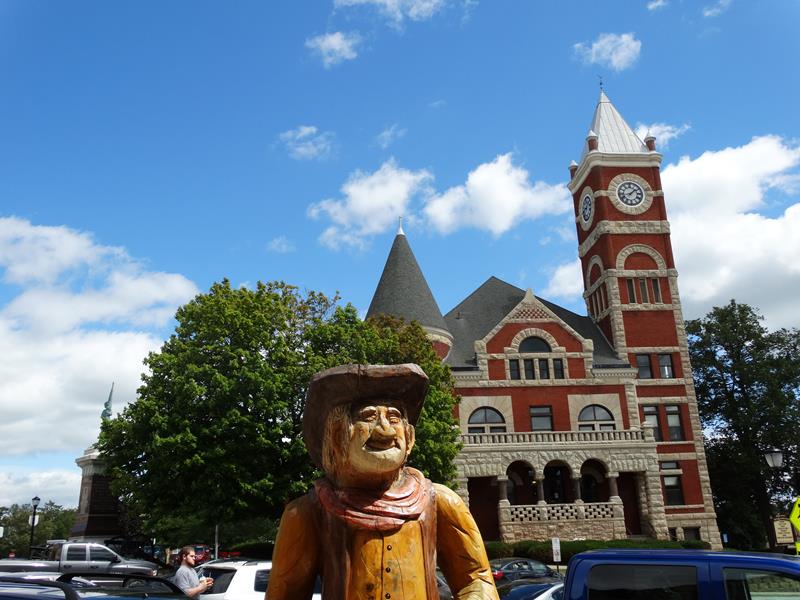 “Through the land of the Swiss” 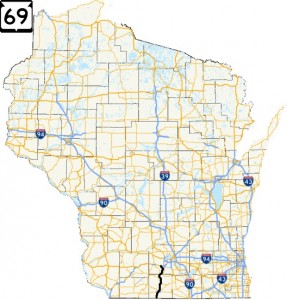 Quickie Summary: State “Trunk” Highway 69 winds through a beautiful section of southern Wisconsin, from just outside Verona through “Cheese Country” toward “Flatlander Country” (Illinois). Along the way, you get to visit the incredible charm of “America’s Little Switzerland” (New Glarus) and the “Swiss Cheese Capital of the USA” (Monroe) and connect to some other great routes in this part of the state. There’s only a little over 40 miles on the whole route, but there’s plenty to stop and see.

The Drive (North to South): Highway 69 begins at the U.S. 18/U.S. 151 freeway on the southwest side of Verona (pop. 7,052), a fast-growing community that’s taking in a lot of Madison commuters. Verona is named after the famous Italian city whose history includes being Julius Caesar’s favorite vacation getaway spot and, of course, the setting for Shakespeare’s Romeo and Juliet. They don’t have a “sister city” relationship, though; Verona, Italy is hooked up with Albany, New York and Fresno, California instead. Who knows, maybe that will change. Verona lies along the Military Ridge Trail, which runs right through its downtown before heading west. Verona takes its hockey seriously: the Eagles Nest Ice Arena holds the Verona Wildcats High School home hockey rink, but is an Olympic-sized rink. They have open skating Sundays after 4pm.

Highway 69 heads south of Verona and immediately takes you through beautiful farmland nestled amidst the rolling hills that are characteristic of Dane and Green Counties. For the first several miles you crisscross the Sugar River through the little settlements of Paoli (more on Paoli coming soon!) and Basco.

Belleville
Next up is Belleville (pop. 1,908), featuring a beautiful town square of sorts called Library Park, an 1888-era railroad depot, and a main street filled with shops and some interesting bars and restaurants in buildings that once served as hotels. Today, they serve local residents, road-trippers like you and I, and people making use of the Badger State Trail, which goes through town. At Library Park, Highway 69 hooks up with Highway 92 for the ride through. 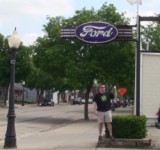 The downtown area has a lot of cool older things to check out, including the old neon Ford sign we saw that hails from at least half a century ago (right). When this area was considered the “frontier”, American statesman Daniel Webster owned land right in town, which was then part of Michigan and then Wisconsin Territory. By 1850, the area was named “Belleville”, after Belleville, Ontario, the original hometown of early settler John Frederick. Belleville is also known for several supposed UFO sightings beginning in 1987, and commemorates them with an annual day and parade.

Highway 69 doesn’t want to leave Dane County right away; just outside Belleville, the road parallels the county line about a half mile north for a while before Highway 92 breaks away for Mount Horeb and you dive south through a nice rock cut into Green County. Like many counties in this part of the state, there isn’t a lot of open water; the county is 585 square miles total but only one square mile of that is water. It’s pretty much little rivers that wind their way through the landscape, and with all these hills, they have to wind a lot. This one cheesy county; co-ops and factories that produce and sell cheese dot the area and they’re not shy about letting you know they’re there. You’ll have plenty of chances to check one or all of them out along Highway 69.

Not too far into Green County, you reach New Glarus (pop. 2,111), a city that celebrates its Swiss heritage with gusto. Named after the Swiss canton of Glarus, and calling itself “America’s Little Switzerland”, this newer Glarus retains Old World charm. The Swiss Historical Village right off Highway 69 – where State Highway 39 meets up – is definitely worth a stop. You’ll feel like you’re in Switzerland, with not only buildings characteristic of the Alps, but Swiss flags flying along with American flags. Folk art, museums, plenty of craft and gift shops, restaurants and some lodging are all to be had in an area spanning several square blocks. It seems so authentic at times, you’d swear you’ll hear yodeling any minute – and you just might.

New Glarus really started because Glarus in Switzerland had fallen on hard times; so hard, in fact, that the canton loaned residents money to find land in the “New World” and settle there. Two of them, Nicolas Duerst and Fridolin Streiff, took a roundabout path but finally found this area, which reminded them of their native land. New Glarus was born. Other residents from Glarus in Switzerland followed, although some had a heck of a time finding their new settlement… communication while traveling wasn’t very good back then. 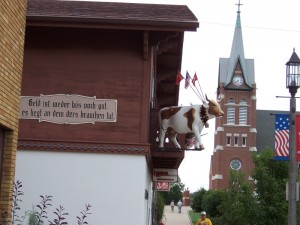 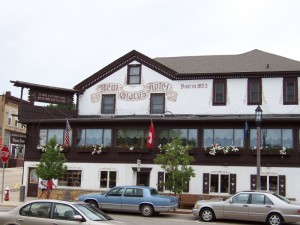 You knew this was coming… New Glarus is, of course, home to the New Glarus Brewing Company (608-527-5850), makers of a variety of handcrafted brews such as Totally Naked, Fat Squirrel, Moon Man, Stone Soup and of course, their practically world-famous Spotted Cow. While not (allowed to be) sold outside of Wisconsin, Spotted Cow is one of those “hot” beers that people around the nation want you to smuggle out of the state when you go visit them. And if they don’t, it’s because they haven’t tried it yet. Dan & Deborah Carey founded the brewery in 1993, with Dan serving as the Brewmaster and Deborah raising the money – making her the first woman to found and operate a brewery in the United States. 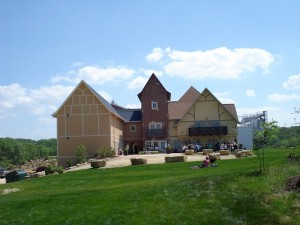 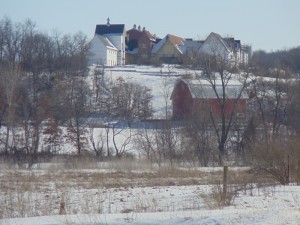 The new New Glarus Brewery facility sits atop a hill along Highway 69 on the south side of town. Above is a summer vs. winter look from Highway 69 in winter. A sprawling complex with buildings that offer several different architectural looks, a little waterfall and a hilltop inside and outside “tasting area” are just some of the benefits that await you during a free tour, with our favorite type of copper kettle shot and the beautiful view of the town from the Tasting Room’s outdoor patio. Tours are available 10am-4pm daily. 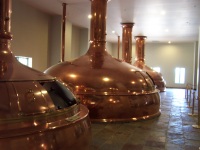 The rolling hill topography continues as you move south past New Glarus Woods State Park, which features 431 acres of camping, hiking, picnicking and, in the winter, snowshoeing. Areas of restored prairie dot the park, and in late April during the spring turkey season, hunters (including disabled hunters) can hunt wild turkeys. However, drinking Wild Turkey in the park is strongly discouraged. If you’re from Switzerland, this area will look like home to you, which is probably why Swiss settlers decided Green County was the place to be. I’ve been to Switzerland; minus the Alps part, it sure looks like this part of Wisconsin.

A series of farms, mostly dairy, dot the landscape as you reach Monticello (pop. 1,146). You’ll know the village because it announces itself with a tall limestone sign and little Lake Montesian, which separates Highway 69 from the heart of town with both water and the Montesian Gardens, a nice community garden with a variety of blooming plants. 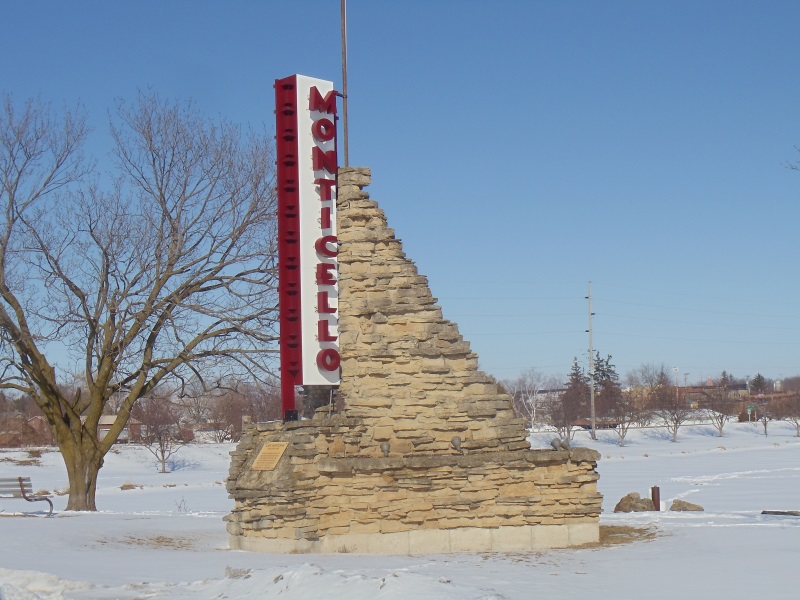 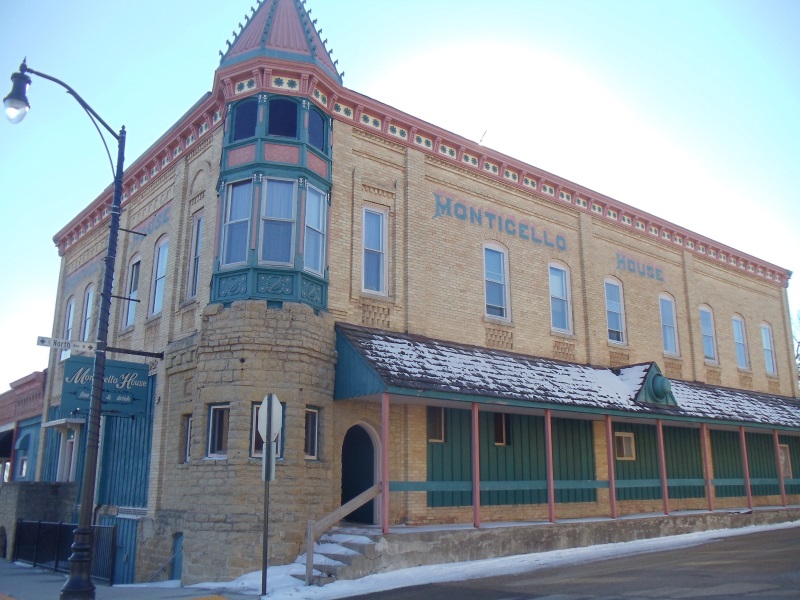 Just south of Monticello, we ran across these handsome guys (above). Chewing away on grass, we definitely caught their attention. At right, one of them looks prepared to charge while the other two seem to be egging him on.

The beautiful rural scenery rules for the next 10 miles or so, and then you reach the outskirts of Monroe, first noted by the Highway 11 Bypass, which also carries Highway 81 here.

**BYPASS ALERT**
A north side bypass of Monroe was built around 1980 to carry Highway 11 and 81 around town; Highway 69 joins this bypass for about a mile before leaving and heading south along the western side of town as 7th Avenue.

Monroe (pop. 10,843) is the hub of Green County and the “Swiss Cheese Capital of the USA.” Monroe High School’s team nickname is the Cheesemakers, after all. The Swiss influence is everywhere, from the flags dotting the surrounding landscape to the architecture downtown to the fact that The Swiss Colony is headquartered here. Monroe also features medical center The Monroe Clinic and truck customization company Monroe Truck Equipment, which did a project for the movie The Transformers a few years back. It serves as the trailhead city for the popular Cheese Country Trail, which runs 47 miles from Monroe to Mineral Point. It’s also a major stop along the Badger State Trail, which runs from Madison through Monroe to Freeport, Illinois – which means it’s not all in the Badger State.

Downtown Monroe offers a charming and rather bustling downtown square. Surrounding the impressive, Romanesque Green County Courthouse, are shops offering everything from boutique clothing to electronics. A stop in Baumgartner’s on the Square (1023 16th Ave., 608-325-6157) lets you sample more cheese and beer products made in the area, including a Limburger with mustard and onion served on rye bread. In the name of humanity, the dish is served with a mint on the side. 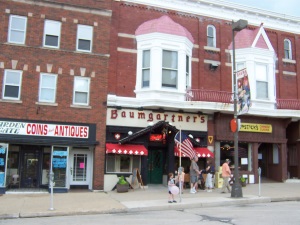 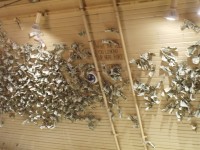 Baumgartner’s is a cheese and sausage shop in the front, tavern and sandwich shop in the back. On the high ceiling above, check out the dollar bills hanging from the ceiling – which almost look like hibernating bats if you’re not looking closely! If you give them a dollar, they’ll use their special technique to “throw” it into the ceiling, where they’ll stick until Cheese Days every other year, when they take the bills down and donate them to a chosen charitable organization in the area. It’s worth the buck to watch it happen!

Another good stop is the Minhas Craft Brewery, (1208 14th Ave., 608-325-3191), located just south and west of the town center. For a long time known as the Huber Brewery, it’s the second oldest continuously operating brewery in the U.S, brewing beer in one form or another since 1845 – three years before Wisconsin entered statehood. They were purchased by Mountain Crest Brewing Company, a Canadian outfit planning that expanded the Monroe facility (read about it in a Milwaukee Journal Sentinel story here). As it stands now, the brewery continues to brew Huber’s traditional beers: Premium (which won the Bronze in the 2002 World Beer Championships) Bock and Light, as well as a great old non-Huber-but-totally-Wisconsin throwback: Rhinelander Beer. Although Rhinelander’s original brewery shut down in 1967, Minhas has continued its recipe and now brews the beer in Monroe. The popular Canadian beer Mountain Creek is now brewed here – a result of the Mountain Crest investment – as are a few malt liquors. Tours are available at 11am, 1pm and 3pm Thursday through Saturday.

Downstairs, the Herb & Helen Haydock World of Beer Memorabilia Museum features historic and modern beer brand memorabilia from all over the country; it’s definitely worth dropping in! There’s also a gift shop and they’ve kept historical pictures to browse, along with other memorabilia highlighting the area’s brewing history.

Out of downtown and re-joining the current Highway 69, which doubles at 7th Avenue, you skim the western end of Monroe. Definitely worth checking out is the Monroe Depot Welcome Center, part of Monroe’s original train depot. Outside, you’ll find the charm of a train station, a fiberglass cow and some large copper kettles. Inside, you’ll find visitor information, the National Historic Cheesemaking Center, which has plenty of old tools cheesemakers used dating back to the 19th century, and original train depot materials, including old schedules, an original bench, photos and more. 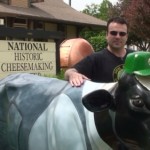 At lower left, an original typewriter and schedule from the days way back when the trains roared through here as part of the Depot Welcome Center; at lower right, some of the cheesemaking equipment in the National Historic Cheesemaking Center, which is part of the Depot. Plenty of vats, weights, wringers, presses and old packaging that held cheeses made back in the 1800s.

Past Monroe, it’s open (and continued pretty) countryside as Highway 69 makes a beeline south to Illinois, where it connects to IL Highway 26 on its way to Freeport, Illinois. 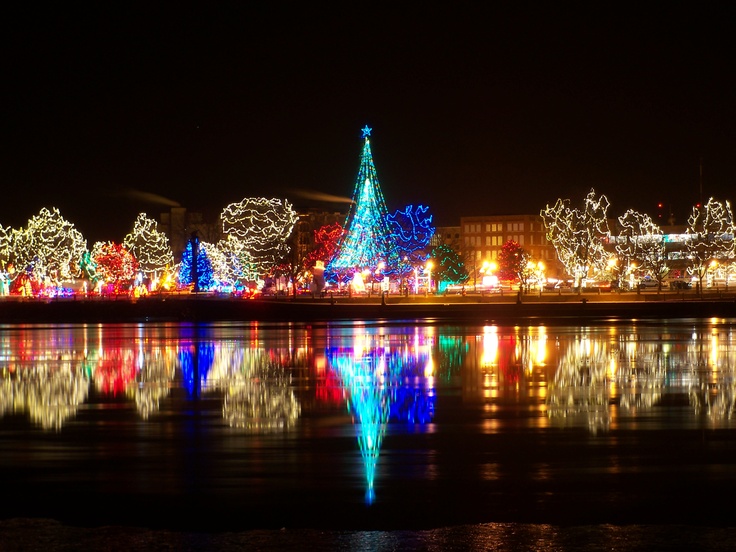