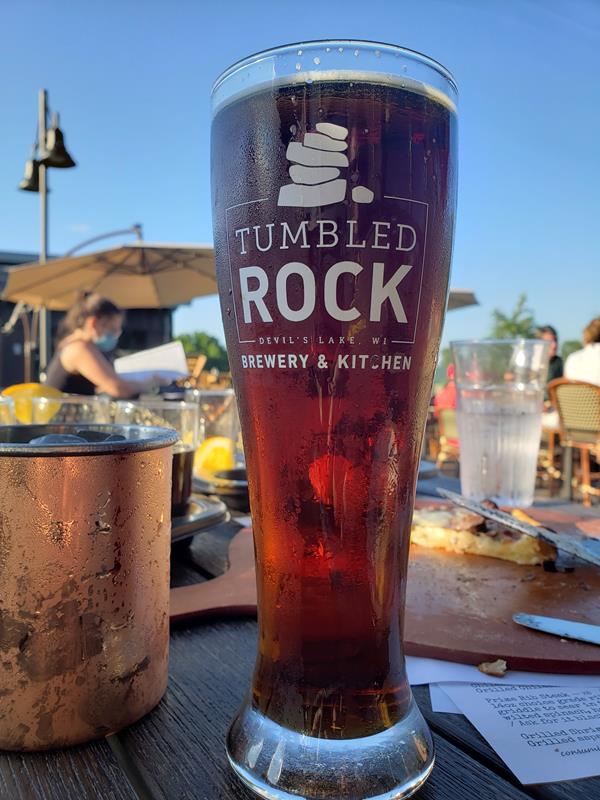 Tumbled Rock Brewery & Kitchen opened between Baraboo and Devil’s Lake State Park in late 2019. Located right along the newly-realigned Highway 136 stretch where it meets up with County DL for the ride to Devil’s Lake State Park, Tumbled Rock covers two acres, with a family-friendly patio flanked by two main buildings. One building is the actual brewery, with a small bar and seating area; the other is the Kitchen, a larger and roomy restaurant space serving up their craft brews and an eclectic menu. In between, patio seating and an open area for kids to get energy out, grown-ups to congregate, live music performances, whatever works – depending on weather, of course.

A “west coast” flair to the beers comes courtesy of Head Brewer Erica DeAnda, who hailed from California and cut her Wisconsin teeth at Octopi Brewery outside Waunakee to get her immersed in this state’s culture before coming to Baraboo. As with many craft breweries, the styles at Tumbled Rock vary and often feature some quite creative names. The Load of Codswallop, for example, is a Dark Mild and only 3.2% ABV, while the Raspberry Imperial Stout – which tastes like raspberries and chocolate – weighs in at 9% ABV. In between, signature beers include their To Wisco, With Love California Common (we told ya there was a west coast influence!), the Udders Up Cream Ale, Nitwit Belgian Wit, Sarrington Road English IPA, Swimmer’s Itch (a Honey Wheat Ale with rhubarb), the Dog Days of Summer Imperial IPA, and the Pink Wellies Oat Pale Ale. That’s not all the beers, but hey, since some rotate we’ll have to let you refer to them for the latest lineup. 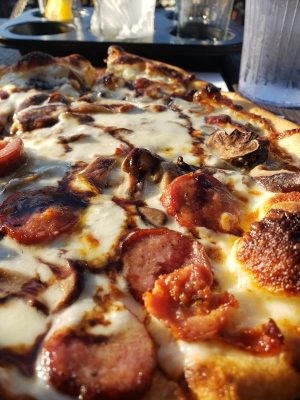 The Kitchen side of Tumbled Rock features a wide variety, including some unique twists on the appetizers. Grilled lamb lollipops, for example, in a dish called Mary Had a Little Lamb; we also loved the Smoked Trout Crostini and the Deviled Eggs 3 Ways. Burgers, loose meat sandwiches, chicken, and Portobello subs are all options, as is the My Bologna Has a First Name, which is indeed a grilled bologna sandwich (with a fried egg) on sourdough, using meat straight from a local Baraboo meat market. Entrees include the Abbondanza Stacked Meatloaf (a hearty accompaniment to any beer), Prime Rib, Chilean Sea Bass, and to class it up even more, Macaroni & Cheese.

With all the family-friendly places to visit in Baraboo and Devil’s Lake just to the south, Tumbled Rock caters to kids too, with a menu offering them their favorite fare to go with that patio area that lets them run around. All in all, it can make for a nice, long, leisurely time as well as a quick pit stop for some good Wisconsin craft beers.

Tumbled Rock Hours are 11am to close, seven days a week.