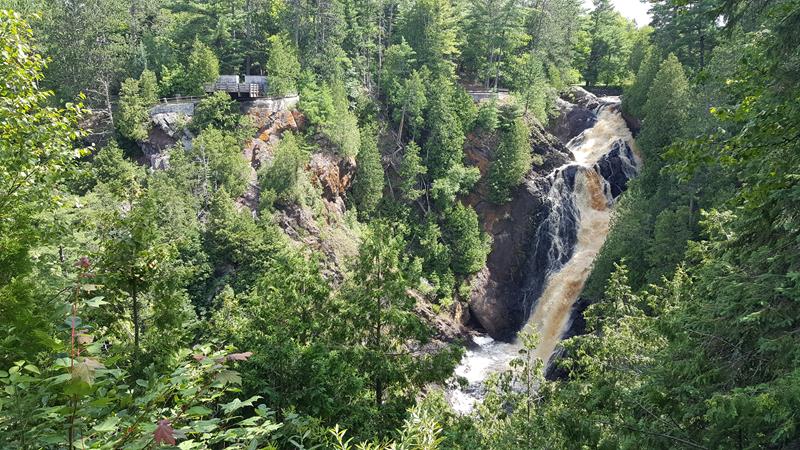 Established in 1920, Pattison State Park is one of the oldest in Wisconsin. It covers over 1,400 acres along the Black in Douglas County about 16 miles south of Superior. Pattison State Park is notable for Big Manitou Falls, Wisconsin’s highest waterfall at 165 feet – which also makes it the fourth highest waterfall east of the Rockies! Nearby, Little Manitou Falls drops 30 feet and offers more great photo ops.

Pattison State Park is named after Martin Pattison, an early lumber man and miner who made his fortune in iron mining. Today’s 42-room Fairlawn Mansion & Museum in Superior was originally Pattison’s house. In 1917 he secretly helped thwart plans to build a “power dam” on the Black River, which would have destroyed Big Manitou Falls. Pattison took the initiative to save the falls by buying 660 acres of land from different owners along the river and donated the land to the state. After initial development in 1920, Pattison State Park got upgrades in 1935 via the Civilian Conservation Corps (CCC) program, which had workers quarrying rock and chiseling them into blocks to create today’s park shelter building, nature center, bathhouse, and more. They also rerouted the river channel, hauled sand in from Lake Superior’s shore to make the beach, installed sewer and water systems, removed old roadbeds, planted trees, and landscaped and built three miles of foot trails.

While at Pattison State Park, you can also enjoy the Gitche Gumee Nature Center, which features exhibits about the park’s cultural and natural history, including its wildlife and geology. Guided nature walks are offered, and children’s nature exploration backpacks are also available. Interfalls Lake, right along the river, includes a 300-foot sand beach with that aforementioned sand brought in from Lake Superior’s beaches. Nine miles of hiking, snowshoeing, and cross-country skiing trails wind through the park. Of particular interest is the Logging Camp Trail, which runs 4.7 miles and includes some of the remains of Pattison’s old logging camp by the Black River. For campers, 59 family campsites are available; 18 of them have electric hookups. Backpackers also have a few sites available.

The park is open year ’round from 6am to 11pm. A State Park vehicle admission sticker is required but you can also buy a day or hourly pass.

You’ll find Pattison State Park right along Highway 35 (which cuts right through it) at the juctions with County B in Douglas County. Access from U.S. 53 – about 15 miles to the east – can be had via County B also. Superior is 16 miles to the north, but from the crest of a hill right at the park, you can see Superior and the hills of Duluth, Minnesota right from the road!