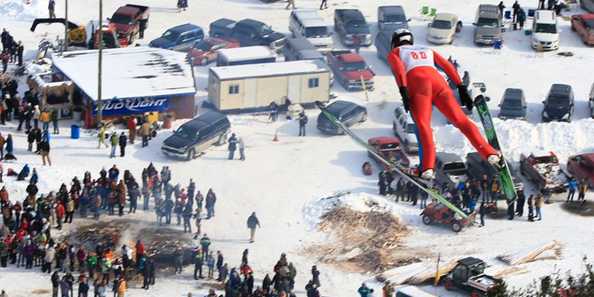 Westby features a ski jump complex with five jumps in Timber Coulee, the largest of which is a 118-meter Olympic-sized hill used for national and international competitions. The Westby Snowflake Ski Jump Tournament happens the weekend of February 2-3 and it’s a blast!

The Large Hill Meet is held early each year in February and attracts not only U.S. ski jumpers but competitors from around the world. The four smaller hills at the site include a 65-meter hill and smaller 40, 20, and 10 meter hills for training junior jumpers. Numerous Olympic and world-class ski jumpers have competed at the Snowflake Ski Jumping Complex.

Even though the Winter Olympics are just a couple of weeks away, the Snowflake Ski Jump is expected to feature approximately 20 national and international athletes from countries including Norway, Finland, Slovenia and the United States.

On Thursday, Feb. 1, Snowflake will host hospitality night from 6-9 p.m.at the Westby Rod and Gun building in Timber Coulee where the 2017 Snowflake royalty, Queen Faith Gardner and her attendants, Alexis Mahan and Rebecca Buckles, will meet and greet visitors.

On Friday, Feb. 2, there will be a kick-off breakfast at Borgen’s Café from 7-10 a.m. Opening ceremonies for the ever-popular “Friday Night Under the Lights” night jump will be held at 7 p.m., with competition slated at 7:30 p.m. There will also be a long standing jump after the regular competition. Live music by “High Mileage” will complete the evening at the Westby Rod & Gun in Timber Coulee from 9 p.m.-1 a.m.

On Saturday Feb. 3, open training is scheduled from 9-11 a.m., followed by opening ceremonies at noon. Competition for the second day of the event kicks off at 12:30 p.m. followed by the long standing jump and awards ceremony. Weather permitting on Saturday there will be helicopter rides and horse-drawn wagon rides on the grounds. The ski club also funds a money pile for kids to collect coins. After the jump spectators are invited to attend a second live music event with “Blue Collar 40” at the Westby Rod & Gun from 3-7 p.m.

The 2017 ski button can be purchased in advance until Thursday, Feb. 1 for $15. After that time, buttons can be purchased at the gate the weekend of the event for $20. The button is good for both days of the tournament and are available at local businesses or can be purchased online. Children under 12 will be admitted free.

Snowflake is also once again teaming up with Logistics Health Inc. of La Crosse to sponsor free admission for veterans to the Snowflake Ski Jump. All current and former military service members, their spouses and their children (under the age of 18) will receive a special event button and be admitted to the two-day event free of charge.

Veterans or service members will need to show a current military ID card or other proof of service such as VFW, Legion, DAV current membership card, or a DD Form 214 (record of discharge) and photo ID. Military buttons are available only at the gate. For more information about the free veteran admission contact Tom Sharratt at 608-634-2118.

You can access the area via U.S. 14/61 and Highway 27; follow the signs and County Road P to Timber Coulee.