The city-wide festival takes place every year on the weekend closest to Norway’s May 17th Constitution Day, also known as Syttende Mai. After being cancelled in 2020, the festivities are scheduled to resume in 2021 on the dates of Friday, May 14th through Sunday, May 16th.

From the late 1800s to the early 1900s, Stoughton enjoyed an influx of Norwegians, and at one time, as many as 75 percent of its residents spoke Norwegian. These immigrants celebrated Syttende Mai unofficially, but it became an annual, city-wide tradition in the 1950s. 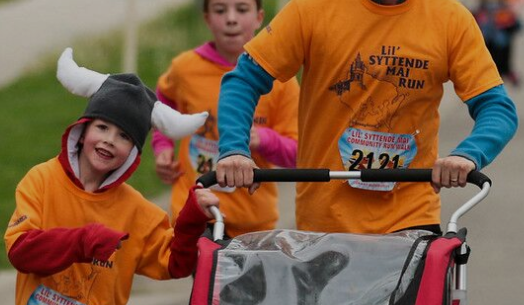 Stoughton Norwegian Dancers
This dance troupe delights audiences with their intricate footwork, athleticism, and enthusiasm for traditional Norwegian culture. Around since 1952 and clad in traditional Norwegian costumes, or bunad, their dancing to music from the fjords, and their colorful and captivating performances are in demand nationwide. You’ll be able to see the Stoughton Norwegian Dancers and their traditional folk performances every day during the three-day Syttende Mai festival.

While enjoying all the Syttende Mai sights and delicious foods, don’t forget to experience the music, dance, and theater performances. Be sure to catch a Norwegian Dancer performance to experience Scandinavian folk dancing. Attend a Stoughton Village Players theatrical performance written and performed by local actors who are expert at presenting the humorous side of life in Stoughton. Be sure to seek out a Hardanger fiddle performance to see and hear these beautiful instruments up close.

Crowning the Syttende Mai Royalty
Check out the crowning of Syttende Mai’s event ambassadors in a tradition that spans five decades. Stoughton’s Syttende Mai royalty kick off the three-day event and declare the weekend a statewide celebration.

Those who wear the Syttende Mai crown receive the honor for their commitment to community service and keeping the local Norwegian culture alive. Each year, a couple learns of their nomination in September and must keep it a secret from everyone, even friends and family, for five months. During the Stoughton Norwegian Dancers’ February Norse Afternoon of Fun, the new king and queen receive their crowns and join previous years’ honorees.

Although their reign is symbolic, the annual Syttende Mai King and Queen dress in traditional Norwegian clothing, or bunad, for the entire festival. In addition to opening the festival, the couple attend more than 40 events over the weekend. They are the festival’s icons and serve as cultural ambassadors to visitors. Have questions about the Norwegian cultural demonstrations, colors, music, foods and costumes you see? Ask this year’s king and queen (or one of our many volunteers).

Young people participate in the Syttende Mai royalty tradition, too. Two local third-grade students are selected as the festival’s annual Prince and Princess and are chosen to carry on Norwegian traditions among their peers. They serve as grand marshals of the Saturday Youth Parade, ride in the Sunday Norwegian Parade, and start The Lil’ Run. The pair also attend the opening dinner and make other appearances throughout the Syttende Mai festival.