Party on the Pavement, Racine 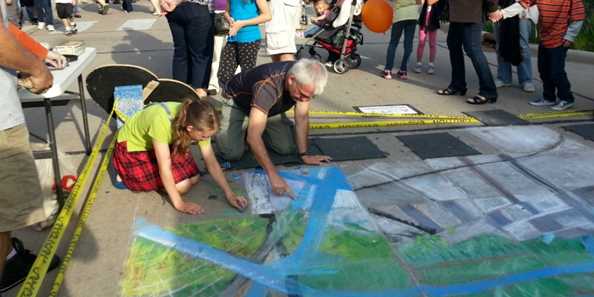 It’s a big party in the Belle City! Party on the Pavement is Racine’s biggest one-day festival, and it happens Saturday, September 21st from noon – 7pm in downtown Racine.

This 17th annual edition features things to see and do along more than 12 city blocks. There’s live music on three stages (Gendlin, Liverman & Rymer Stage in at Main & State, the Network Health Stage on Monument Square and the Indian Motorcycle of Racine Stage at 522 Sixth St.), see below for a full lineup of performers!

International cuisine can be enjoyed throughout Party on the Pavement – including Spanish, Filipino, Italian, Korean, Thai, Japanese, Mexican, Irish, Jamaican and American – available all day long.

For the car show, check out the fully-functional KITT car from the “Knight Rider” television show! It will be featured at during the car show along Wisconsin Avenue between Fourth Street and Seventh Street during Party on the Pavement. It is believed to be the only KITT car with a fully operational computer system in North America.

Party on the Pavement favorite Touch-a-Truck is back this year. Large construction equipment, agricultural equipment, law enforcement vehicles and more will be located in the former Porter’s Lot on Sixth Street for everyone to touch, feel, and sit in or on.

You can also check out aerial arts performances will be held at the end of Sixth Street in front of Pepi’s Pub & Grill, create hands-on art projects from 1 to 4 p.m. at the Racine Art Museum, and see live glass blowing demonstrations at Hot Shop Glass (239 Wisconsin Avenue.)

Be sure to drop by the Real Racine booth (#118) on the west end of Sixth Street for FREE face painting, kids’ games with prizes and take your picture at our new Selfie Station!

The afterparty to Party on the Pavement will take place at The Brickhouse (316 Main Street) and bring you laser shows, beats, drinks, and treats throughout the night! Enjoy $5 Moscow Mules, $5 Double Tall Absolut Mixers, $3 Smirnoff Berry Bombs, and $25 White Claw Wildberry Fishbowls (and, you know, drink responsibly…)

It’s all presented by the Downtown Racine Corporation. Highway 20, 32, and 38 are right there!

Party on the Pavement Address: