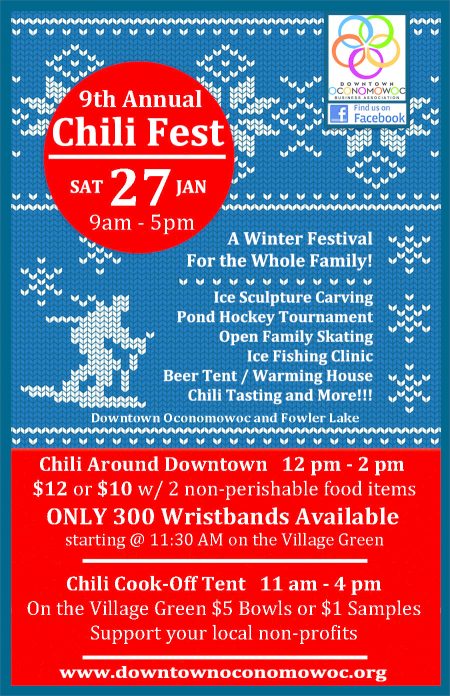 Oconomowoc warms up the chilly January weather with its 9th annual Chili Fest on Saturday, January 27th! Ice sculptures and carvings along the downtown streets, ice and pond hockey on Fowler Lake, open family skating, a beer tent, and of course plenty of chili tastings.

Chili tastings are hosted by downtown businesses and local fundraising organizations with proceeds going to local charity. As you stroll downtown and stop in shops you can check out professional ice carvers who dot the downtown streets chiseling frozen blocks into works of art. A DJ and beer tent – which will also offer burgers and hot cocoa – are set up on the lake near the hockey tournament. A family skating rink is groomed nearby and an ice fishing clinic is also planned for the young anglers. It should be a fairly mild Saturday, so note ice conditions if you plan on skating.

While you stroll Wisconsin Avenue, check out a great burger at Crafty Cow, browse boutique shops, have a beer at Lakerz Sports Bar & Grill, and get a gander at the marker by City Hall commemorating the former location of the Strand Theatre, notable for being the place where the classic film The Wizard of Oz first premiered to audiences. Plenty of fun, food, skating, history, and more in this incredibly charming town at the western end of Waukesha County’s Lake Country.

Oconomowoc is where Highways 16 and 67 meet, just north of I-94’s Exit 282. The downtown is wedged between Lac La Belle and Fowler Lake and stroll along Wisconsin Avenue and Main Street reveals plenty of great shops, beautiful architecture, restaurants, historic markers, a dam, and much more. And of course on Saturday the 27th during Chili Fest, plenty of skating and chili!