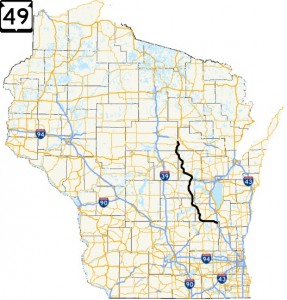 Quickie Summary: State “Trunk” Highway 49 meanders through a large part of central Wisconsin. Starting and ending not in towns but at interchanges with other major Wisconsin highways, Highway 49 links a series of towns and recreaion areas on an almost haphazard route path. Highway 49 touches Horicon Marsh, the site of the Republican Party’s founding, Rippin’ Good Cookies’ plant and headquarters, car shows at Iola, and provides access to some of the best fishing in the state.

The Drive (South To North): Highway 49 starts at U.S. 41 (which could become “Interstate 41” soon… watch this site for details) just north of Lomira in the northeastern corner of Dodge County. 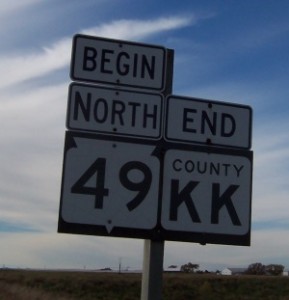 Taking over from a lonely county road, Highway 49 starts up at I-41 and begins a 128-mile journey through the middle of eastern Wisconsin with a lot of interesting stuff ahead.

Within eyeshot of the interchange where Highway 49 begins, the massive Quad/Graphics plant cranks out incredible amounts of printed material – magazines, books, and just about anything else that can be read – or ripped. Much of its production goes out by train, as evidenced by the railroad crossing. Right after is the junction with the original U.S. 41, which is now Highway 175. Also visible at times to the north is a sign of the future: giant turbines providing wind-generated electricity, an area now known as the Forward Wind Energy Center. Eventually there will be 86 wind turbines here, playing off the wind generated by this high ridge above the Horicon Marsh, which is coming up along the route. 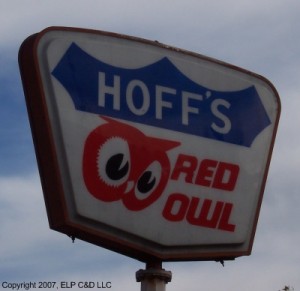 In Brownsville, you can stock up on goodies at a Red Owl, a chain of stores that were once all over this part of Wisconsin. Very, very few still exist, so it’s now cool enough to take a picture of them. We LOVE these old signs!! 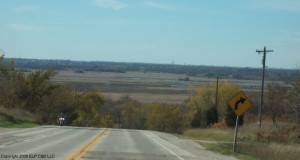 The flat expanse of Horicon Marsh appears abruptly as Highway 49 approaches from the east. After a curve, the road cuts right across the marsh, providing a great opportunity for bird-watching and animal-dodging.

Highway 49 runs right through the pleasant little burg of Brownsville (pop. 570), which is the last town before you reach the Horicon Marsh National Wildlife Refuge, both a State Wildlife Area and a National Wildlife Refuge. It’s a pretty unmistakable feature as you approach it: before you suddenly is a vast expanse of flat land that looks like a lake had been drained there. And that’s pretty close to how things got to be this way. When the glaciers that once covered this part of the state retreated, a moraine was formed that worked like a dam and created a large lake. The Rock River, which uses the Marsh as its source, gradually drained the natural lake and turned it, well, marshy. People tried manipulating it again twice: from 1846 to 1896, a dam re-created the glacial lake; after it became a marsh again, there was an attempt to drain it from 1910 to 1914 and use the area for farmland. That didn’t quite work either, and today the Marsh is preserved and protected to serve as one of the world’s largest “rest stops” for migrating birds. Over 290 species of our winged friends have been documented in the Marsh, making it a top birding area. It’s a favorite layover for over 200,000 migrating Canada geese as they make their way back and forth in spring and fall.

The Horicon Marsh covers about 50 square miles – equivalent to about half of the City of Milwaukee. The southern third of the marsh, near the City of Horicon (where Highways 33 and 28 trek), is managed mostly by the state; the northern two-thirds is under Federal control by the Fish and Wildlife Service. Highway 49 veers into the Marsh by curving onto the Dodge-Fond du Lac County line and cutting across its northern edge. It’s a long, straight stretch populated with birds overhead, cattails flanking the swampy land on either side, photographers parked along the shoulders and enough animals crossing to prompt a sign announcing a running tally of year-to-date roadkills (621 last time we rolled through).

Cattails a’plenty: the Horicon Marsh area is the largest freshwater cattail marsh in the United States.

There are two places along Highway 49 that will help you out if you want to find out more or tour the Marsh. From mid-April to mid-November, the Marsh Haven Center offers hiking paths and an observation tower at the northwestern edge of the Marsh itself. The Horicon National Wildlife Refuge Visitor Center is on the east side of the Marsh, offering more information and tours.

After the straight shot across the Horicon Marsh, you go up a hill and before long you cross U.S. 151 on its new freeway path between Madison and Fond du Lac. A series of restaurants and hotels hint at the sizable town ahead, Waupun (pop. 10,718). Long known for holding Wisconsin’s primary state prison, Waupun is also billed the “City of Sculptures”, being the home of famous sculptor Clarence Shaler and a series of his works. Sculptures like End of the Trail, Who Sows Believes In God, Dawn of Day, and Morning of Life grace the city in various parks and streetsides. 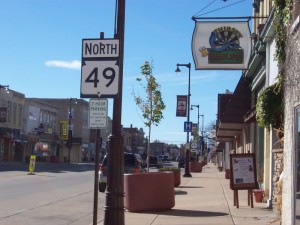 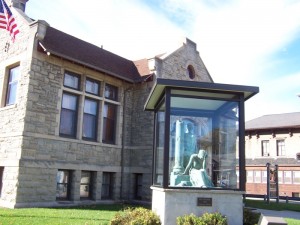 Throughout the city, the sculptures show up to greet you. This one above is called The Citadel.

Waupun has held Wisconsin’s primary state prison site since 1851, when it was selected due to its “proximity to transportation and readily available building materials in the area”, according to the Department of Corrections’ historical site. Back in the day, Wisconsin’s justice system was considered so efficient, a popular chant in Milwaukee was once “crime on Sunday, Waupun on Monday”, indicating that infractions would be met with swift action. This was before a lot more lawyers showed up. The Wisconsin Historical Society page on the Waupun Correctional Facility reports that in 1878, sales of the goods manufactured by the prisoners produced enough revenue to run the prison without drawing from the state’s treasury. Wouldn’t that be nice now? You can find the State Prison south of Highway 49 along Madison Street, also known as County M. 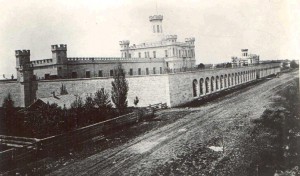 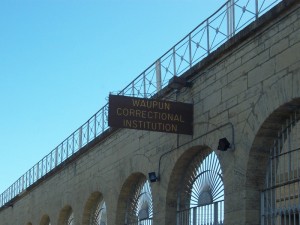 These are the walls in the question, built in the 1850s, that still stand today. 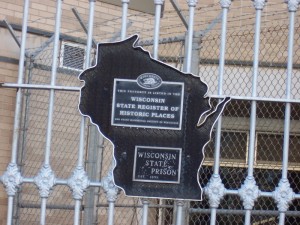 The prison’s history makes it an easy candidate for the State Register of Historic Places. 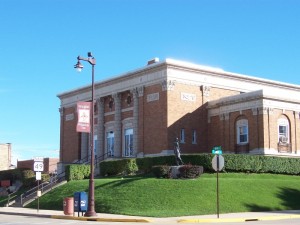 Another civic building in Waupun, featuring yet another statue in its front yard (click to enlarge).

From Waupun, Highway 49 heads west out of town and then bends northward up into Fond du Lac County for a run through rolling farmland. 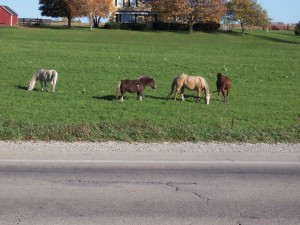 On the road north of Waupun, one farm had horses a’plenty, which made for a nice view.

After about eight miles, you curve again in the little burg of Brandon (pop. 912), which is slighly under one square mile and produced one Hollywood actress, Laura Ramsey (her imdb link is here.) Brandon’s growth started with the arrival of the railroad in 1856, when the area was named Bungtown. 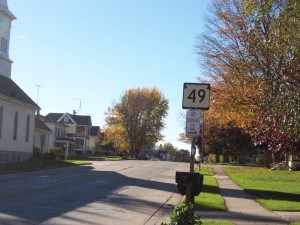 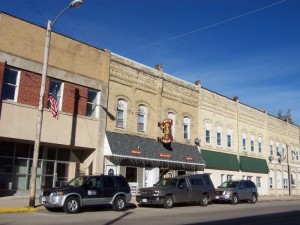 Highway 49 goes through Brandon, a small burg on not only the highway, but the railraod from Waupun to Ripon. The State Trunk Tour caravan stopped in Mel’s Bar & Grill in Brandon and had a pretty good time before resuming the trip north and west.

After Brandon, Highway 49 hooks up with Highway 44 and heads north into Ripon (pop. 7,619). Ripon was named after the English cathedral city of Ripon, North Yorkshire, in 1849 when it was first settled. The 1850s were busy for Ripon; in 1851 city founder David Mapes founded Brockway College, which evolved into Ripon College. Three years later, the Republican Party was founded in Ripon’s “Little White Schoolhouse” – which happens to be located right along today’s Highway 49. It’s all part of Ripon’s downtown, where Highway 49 joins with Highway 23 to encircle the downtown square.

Ripon is also home of the NFL. Really! We’re talking the National Forensic League, an organization dedicated to training students in communication and debate skills. Founded in 1925, it’s the nation’s oldest and largest debate and speech honor society. Alums of this NFL include President Lyndon Johnson, Senators Russ Feingold and Bill Frist, Oprah Winfrey, Ted Turner, Kelsey Grammar, Shelley Long, Jane Pauley, CSPAN founder Brian Lamb, Supreme Court Justice Stephen Breyer and more. So if you stop in town and get into a debate with someone, be prepared. There could be a speech and debate expert that’ll mop up on any topic.

Ripon College counts among its graduates and students people like actors Spencer Tracy and Harrison Ford, singer Al Jarreau and Brittany “McKey” Sullivan, a recent winner on America’s Next Top Model. Ripon College students, like other area residents, generally revel in the fact that the town is home to Rippin’ Good cookies (now owned by Bremner Biscuit Company.) Ever had the Mint Creme Cookies? If not, you have yet to live to the fullest extent. The Rippin’ Good Cookie Outlet can be found by following Highway 44 out of downtown for a few blocks (420 E. Oshkosh Street, 920-748-0293). It is generally open Monday-Friday 8am-4:30pm and Saturday from 8am to 1pm. Prepare for sugar and goodness.

Highway 49 joins with 23 west out of Ripon into Green Lake County for a few miles. Green Lake (pop. 1,100) lies just to the south, home of the famous Heidel House Resort. Green Lake – the lake – is the deepest natural inland lake in the state and the Midwest, averaging over 100 feet deep across its 7,346 acres and reaching a maximum depth of 237 feet.

Breaking away from Highway 23, Highway 49 heads north all the way to Berlin (pop. 5,305), pronounced “BER-lin”…supposedly as a result of anti-German sentiment during the two World Wars. Either way, pronounce it right or they’ll know you’re from out of town.

Berlin to Waupaca and beyond, with more pictures of all of this, is coming soon!