“State Fair to the Covered Bridge”

Quickie Summary: State “Trunk” Highway 181 runs along western portions of Milwaukee and Ozaukee County communities, serving as a major artery for the Wisconsin State Fair, the city of Wauwatosa, northwest Milwaukee, Mequon, and the “Five Corners” area in Cedarburg, just south of where Wisconsin’s last covered bridge can be found. Along this route is a mix of big city neighborhoods, rural farmland, growing towns, suburban villages, and of course the grounds of the Wisconsin State Fair and the Milwaukee Mile. All in a 22-mile drive.

The Drive (South to North): Highway 181 begins at Highway 59/Greenfield Avenue in West Allis (pop. 60,411), which was called North Greenfield early on. The establishment of a huge Allis-Chalmers factory in 1902 led to the town changing its name and incorporating as West Allis in 1906; that company dominated manufacturing in the area – and the nation – for decades before closing in 1987. For nearly eighty years, tens of thousands of workers descended on the West Allis plant, as well as other manufacturers in town – some of which are still cranking out products. Hundreds of thousands head to State Fair Park in early August for the Wisconsin State Fair, one of the nation’s leading state fairs. After starting in Janesville in 1851, the Wisconsin State Fair made West Allis its permanent home in 1892. The grounds includes the Milwaukee Mile, the oldest operating motor speedway in the world; it’s hosted most of racing’s legendary drivers at one time or another, from Barney Oldfield and A.J. Foyt to Jeff Gordon and Danica Patrick. The Milwaukee Mile continues to host NASCAR and Indy events, including IndyFest, on its legendary oval. And during the State Fair, you can park on it!

Highway 181 runs along 84th Street in West Allis, and intersects with I-94 just north of State Fair Park. The Pettit National Ice Center is at the junction with the freeway; it’s one of the few Olympic-qualifying speedskating rinks in the world! After all, this area has sprouted the likes of gold medalists Bonnie Blair and Dan Jansen – it’s obviously a haven for champions. The Pettit National Ice Center features two full-size hockey rinks and a quarter-mile speedskating rink, among other features that make it a center for Olympians, athletes in training, hockey players, and just people who love to skate. The oval is open to the public for skating, and there’s even a .28 mile running track along the outside of the oval. 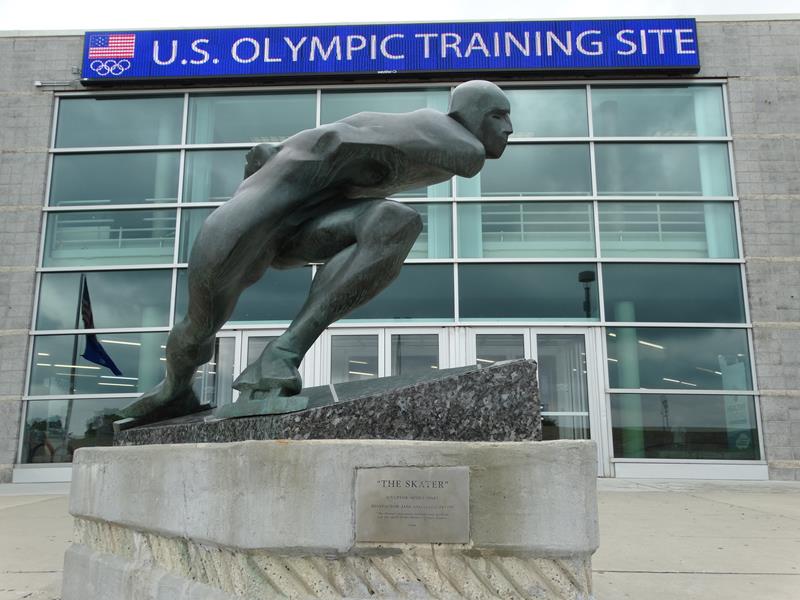 “The Skater” statue in front of The Pettit National Ice Center.

I-94 & Highway 181 is where you’ll find one of only two indoor Olympic speedskating tracks in the nation. The Pettit National Ice Center attracts athletes from around the world for training… and you can skate, play hockey, or even jog around the outside of the ice all year ’round!

Just north of I-94, Highway 181 ducks into a brief silver of the city of Milwaukee and intersects with U.S. 18/Blue Mound Road into Wauwatosa (pop. 47,000). This area was originally settled by Charles Hart in 1835 and was named “Hart’s Mills” for a mill he built along the Menomonee River. The railroad came through shortly thereafter, as did the Watertown Plank Road, an early toll road (seriously built with planks) that connected Milwaukee and Watertown by 1849. The town – then village, then city – was renamed Wauwatosa, the Potawatomi word for “firefly.” Wauwatosa mixes tree-lined residential neighborhoods, a world-class medical center with the Medical College of Wisconsin as an anchor, a downtown village brimming with shops, restaurants, and historic crossroads, industrial parks, factories, a major regional shopping mall… basically, Wauwatosa has a bit of everything.

Highway 181 enters Wauwatosa as 84th Street and becomes Glenview Avenue until it reaches the historic Watertown Plank Road. You literally jog over a few blocks on the road before turning left on a tight bridge that leapfrogs the Menomonee River Valley and lands in the “downtown” – Wauwatosa’s village. The old road continues downhill to a railroad crossing and a bridge over the Menomonee River; that’s the original Watertown Plank Road and Highway 181 until the bridge was built in the 1970s to ease congestion.