Since you’ve been freezing your buns all winter, cele-BRAT-e the official start of summer with the World’s Largest Brat Fest in Madison! Presented by Johnsonville, it takes place Memorial Day weekend at Willow Island. Putting the sizzle into summer for over 30 years, Brat Fest is one of the Midwest’s largest and best, family-friendly music festivals right in the heart of the capital city. And they’ve also sold over 3.8 million brats! 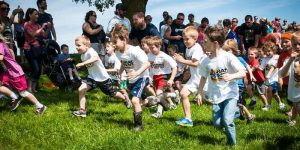 It’s not all about the music, however. Enjoy ice cold beverages and tasty food, including BRATS, of course. The Bratteyball Tournament is a “bratty” volleyball tournament with four divisions competing on Saturday. There will be a kids’ zone with plenty of activities to keep the young ones busy – including a “bounce zone” and a petting zoo. There’s Ultrazone Laser Tag, a Sports Zone, even the Budweiser Clydesdales will make an appearance!

Free shuttle buses will be running between the zoo and Brat Fest all weekend, giving families the chance to see the new Arctic Passage exhibit.

Admission to the World’s Largest Brat Fest is FREE!  And while it’s a little known fact that brats are even tastier when eaten for a good cause, all of the Fest’s proceeds go to numerous local charities. Check it all out on Willow Island at the Alliant Energy Center and kick off the summer right with some of that Brat Fest sizzle.

Harley Davidson of Madison is providing exclusive V.I.P. motorcycle parking for 200 bikes – just use the entrance off Rimrock Road (just off the Beltline) to access that area.

Get details on all the events, food and drink menus, and more at the Brat Fest website here.

You can get to Madison so many ways: I-39/90, I-94, U.S. 12, 14, 18, or 151, or Highways 30 or 113. Enjoy a beautiful Memorial Day weekend in town with Brat Fest – and check out the State Capitol, the Wisconsin Memorial Union Terrace, Lakes Mendota and Monona, the Henry Vilas Zoo, and everything else our capital city has to offer!