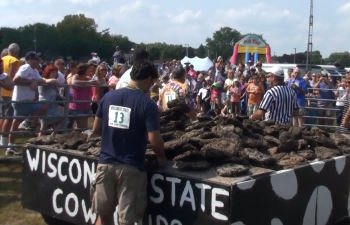 It’s an annual Labor Day weekend tradition in Prairie du Sac to toss cow “chips” at this annual Cow Chip Throw & Festival, which happens Friday & Saturday, August 30th and 31st this year. Dried out and surprisingly unoffensive to the nose, these nuggets of nastiness get hurled into the air by kids and adults alike with the goal of the most distance as possible – with a crowd of onlookers often in the sights where they land. The current record is 248 feet, but records were made to be broken!

Of course, that’s the main event; there’s also music with plenty of bands, a “Tournament of Chips” parade, kids’ activities including a pedal pull, a Fine Arts & Crafts Fair, a run/walk, and much more. So whether you want to throw cow chips, dodge them, or just watch from a safe distance, there’s plenty of bovine-related fun to be had at the 44th annual Wisconsin State Cow Chip Throw & Festival!

You’ll find the festival just off U.S. 12 and Highways 60 and 78 in Marion Park at 1st & Grand in Prairie du Sac. And YES, they’ll have a big screen TV so you can watch the Badgers take on the University of South Florida Friday night!

Here’s a video short from when we first visited the Wisconsin State Cow Chip Toss in Prairie du Sac back in 2009:

And here’s how it went in 2016, produced by the Festival itself with better equipment: