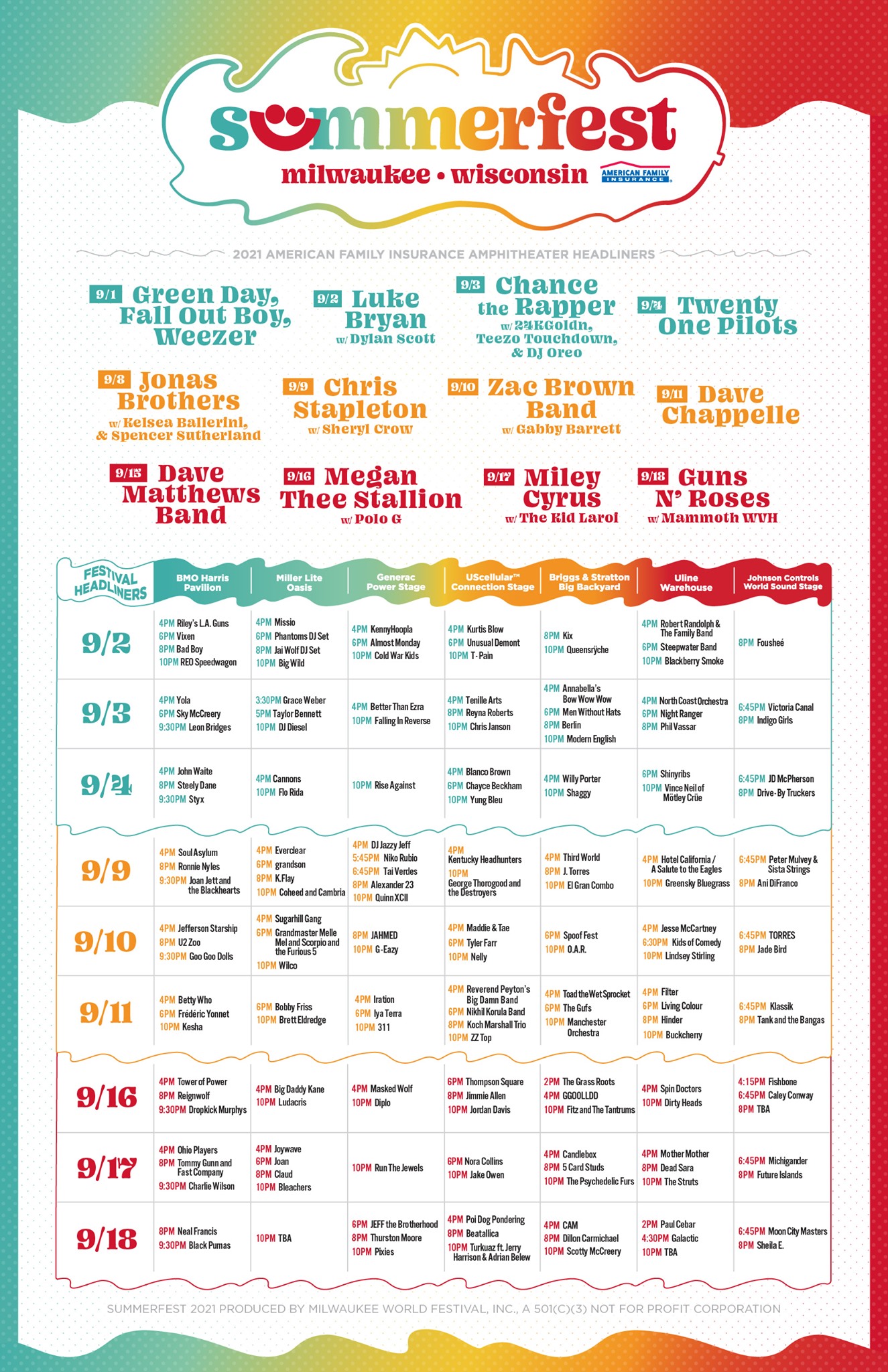 Summerfest 2021 rolls on into its final weekend! It’s the “World’s Largest Music Festival” on Milwaukee’s lakefront, and after the pandemic-related cancellation epidemic in 2020, it’s been back! (Thought there are COVID-19 related protocols.) Typically consisting of 11 days of concerts and fun across a 12-day span, you and nearly 900,000 of your closest friends can enjoy over 1,000 performances from nearly 800 acts on the 75-acre Maier Festival Park grounds.

In 2021, Summerfest implemented a new type of schedule: shows and events across three summer weekends, all Thursday – Saturday with a “Wednesday Weekend Kickoff Concert” at the American Family Insurance Amphitheater the evening prior each week. The dates will be in September this year to maximize the possibility of the COVID vaccine making it safer for a bigger gathering. The dates are September 2-4, 9-11, and 16-18, 2021.

Summerfest dates back to 1968 and has since become the backdrop for the music industry’s hottest stars, emerging talent and local favorites to create unforgettable live music experiences in a world-class festival setting. Running along Milwaukee’s lakefront nestled within downtown, Discovery World, I-794, and Lake Michigan, Summerfest offers not only music but over 45 food and beverage vendors, four marketplaces offering crafts and wares from all over the world, interactive exhibits, and just cool general fun.

Due to the increasing spread of COVID-19 including the Delta variant and in part of the requirements from many bands and their staff, Summerfest is requiring the following for entry: a) proof of having had the COVID-19 vaccine, or b) proof of a negative COVID-19 test within the previous 72 hours of your entry. Those who have purchased tickets to show previously are eligible for a refund if they now choose not to attend a show, within certain timeframes. Full information and details are here.

Single Day Tickets run $23 per day, you can print them at home or put them on your mobile. These tickets are good for the entire grounds and any show with the exception of the American Family Insurance Amphitheater shows.

Parking lots are available just to the west of the grounds and throughout downtown Milwaukee and the Historic Third Ward. The Milwaukee County Transit System also offers “freeway flyer” express buses to and from the grounds from numerous Park & Ride lots in the metro area.

The Summerfest Grounds can be accessed directly via I-794, U.S. 18, and Highway 32. I-43/94 and Highways 38, 59, and 145 also bring you within a mile of it – which is how far away some people park! Either way, it’s one of the greatest music festivals on the planet and a definite State Trunk Tour recommendation.