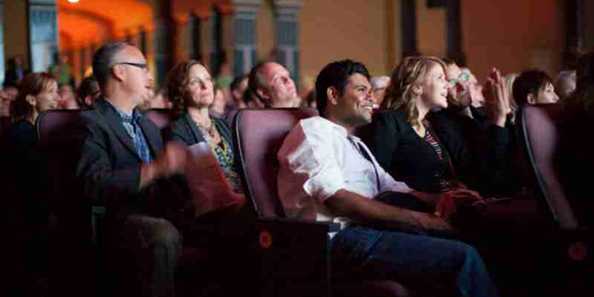 Running through November 1, the annual Milwaukee Film Festival offers more than 300 films, dozens of special guests, seven world premieres, parties for days—this one’s got it all.

Oriental Theatre (2230 N. Farwell Avenue/Highway 32) on Milwaukee’s East Side serves as the base.
The Oriental Theatre is Milwaukee’s historic movie palace. Its opulent, lavish, East Indian-inspired décor has attracted teeming hoards since its opening in 1927 and makes this theater a must-see-to-believe destination. It has long been the anchor theater of the Milwaukee Film Festival. Amenities include 2K and 4K digital projection, 35mm and 70mm film projection, 6- and 8-channel Dolby Digital Sound, full-service concession stand, and a full bar with beer, wine, and spirits.

Avalon Theater, 2473 S. Kinnickinnic Avenue (also Highway 32)
The Avalon Theater is located in Milwaukee’s Bay View neighborhood. Notable for its combination of classic movie palace and al fresco Mediterranean décor, the theater’s pièce de résistance is its ever-glowing ceiling of stars and planetary features, found in the main auditorium. Amenities include a full-service concession stand, full bar, leather recliners, an adjoining restaurant (Mistral), and the famous atmospheric ceiling—keep an eye out for shooting stars during your movie.

Times Cinema, 5907 W. Vliet Street
The Times Cinema is a single-screen theater on the western edge of Milwaukee that opened in 1935. The cozy neighborhood theater screens everything from summer blockbusters to indie fare to cult classics. Amenities include a full concession stand, full dinner menu, bar service, and couch-like seating.

Jann Serr Studio Cinema, 1925 E. Kenilworth Place (between Farwell & Prospect, both Highway 32)
Around the corner from the Oriental Theatre, the Jan Serr Studio Cinema is located on the top floor of the Kenilworth Square East building and is home to the Milwaukee Film Festival’s first pop-up cinema. Box office and line queues will be located in the building’s breezeway, located off of E. Kenilworth Place, between Farwell Ave. and Prospect Ave. Once a Ford Model-T factory, watching films in this newly remodeled space will provide a great Milwaukee Film Festival experience in a brand new location! Amenities include that the venue is outfitted with professionally installed and calibrated sound and pictures, ensuring audiences are provided with the optimum viewing experience, including stadium seating built out for up to 200 people. Light concessions will be available on site during the festival.