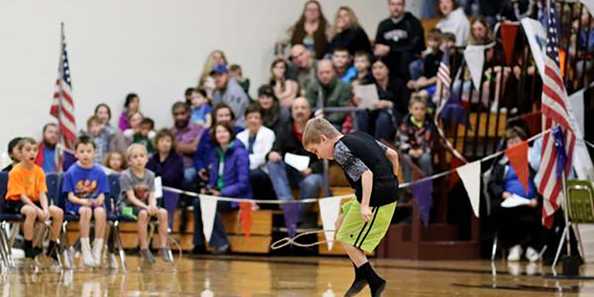 Bloomer’s rope jumping boom began in 1960 when a former coach named Wally Mohrman became the physical education teacher in the schools. Knowing the value of the exercise, he decided to stir some interest with a contest. The emphasis was on speed jumping: how many times a student could whip a rope under his feet in a given period.

Each year interest grew. Champion jumpers emerged, and records were established to shoot at. The finals are held each year on the last Saturday in January. Each year, students from Grades 1 through 8 train hard and come to Bloomer to compete.

To add to the contest, Mohrman formed a group called the “Swinging Safari”. Its girls do precision rope jumping routines to various types types of music. Their appearances highlight the rope jump event.

Bloomer has made itself into America’s swingingest town. Bumper stickers, t-shirts, and signs at the city limits all proclaim their fame. Many other schools are sponsoring speed jumping contests and sending their winners to the big world championship in Bloomer. Each year the Bloomer contest is bigger and better with records constantly being challenged.

Registration will begin for each division at 8 a.m. at Bloomer Senior High School. All entrants must be registered by 9:30 am.

Preliminaries will begin promptly at 10 am. We will take a break
between each division. Preliminaries should be completed by approximately 2 pm.

The Hospitality Room will be open from 9 a.m. until 5 pm. Coffee, pop, chips and sandwiches will be served at very reasonable prices.

Finals will start at 3 pm with the finals competition lasting an estimate of 2 hours.

All finalists are asked to be back by 2:30pm for the Finals Competition.

Bloomer is along Highway 40, right by Highway 64 and the U.S. 53 freeway just a short distance north of Chippewa Falls. It’s a jumpin’ good time – and definitely a unique one!