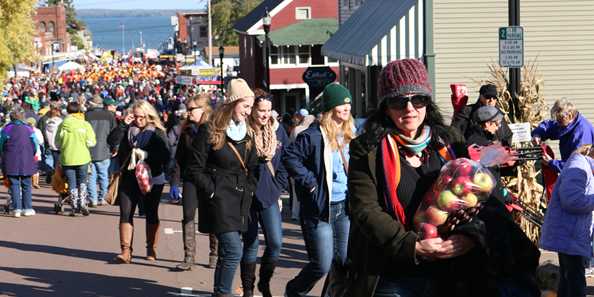 The Bayfield Apple Festival is hailed as one of the 10 Best Fall Harvest Festivals in the nation by USA Today!  Bayfield celebrates its Apple Festival every October and in 2022 it will take place October 7th through the 9th.

The three day event features a farm market featuring local producers, over 60 orchard and food booths selling Bayfield’s apples, apple delicacies, and festival food favorites! There is plenty to buy and see at the 140 art, craft and vendor booths. Kids carnival rides and games, an apple peeling contest, fish fry & dance round out the offerings.

You can also catch Big Top Chautauqua’s Blue Canvas Orchestra perform throughout the weekend on the Grandstand stage. The festival culminates with the Grand Parade on Sunday, which features a 400 member “Mass Band” finale.

Bayfield is located along Highway 13 on the shores of Lake Superior, about 15 minutes north of U.S. 2. U.S. 63 brings you towards Bayfield from the Hayward, Spooner, and Twin Cities areas; U.S. 51 north through the North Woods sends you toward U.S. 2 for the connection to Bayfield, too. Enjoy the fall colors on your ride!

Read about additional “things to know” below!