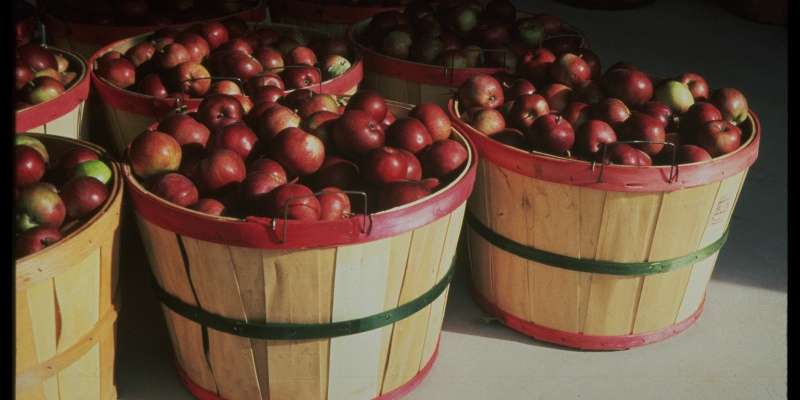 No, not the Apple computers. We’re talking one of our favorite foods and fruits!  Galesville’s Apple Affair is a major event in Trempealeau County. It all started in 1983 as part of Wisconsin’s effort to promote the state’s apple orchards; today, Apple Affair draws people from throughout the state and nearby Minnesota.

This family event is held on the Square in downtown Galesville Saturday, October 3rd.  Kicking off the annual event is breakfast which is served in the Big Tent on the Square.  The scrambled egg omelet is cooked in one of the biggest skillets you will ever see!  It took 1,250 eggs, 30 pounds of ham, 10 cups of onions, 9 pounds of butter, 630 squares of coffee cake, 22 gallons of apple juice, 21 loaves of bread and 1,200 cups of coffee to feed the 630 people who attended the first event. Since then, attendance numbers in the thousands.

As the day continues, the aroma wafting through the Square changes to the smell of bratwurst and hot dogs cooking on the outdoor grills.

In another tent, Galesville’s famous 10-foot apple pie tempts the taste buds as it bakes.

In the parking lot across from the Square, artisans and crafters attract shoppers with everything from dollhouse miniatures to crocheted doilies to braided rugs to woodworking crafts and so much more.

Throughout the day, music from the big tent permeates the air.  Provided by area performers, the music is enjoyed by young and old alike.

The Apple Affair Bike Tour is a popular activity for the day.  Hundreds of bicyclists spend most of the day touring the Galesville apple orchards and surrounding area.  The scenery of this “Garden of Eden” is spectacular and the event is a perfect family affair.  The first Apple Affair attracted 42 bicyclists who rode the 28.7 mile loop from downtown Galesville through the orchards. The bike tour has grown in popularity and some years, depending on the weather, more than 200 bicyclists have participated. To find out more about this year’s ride go to www.appleaffairbiketour.com.

Other activities that day include the Trempealeau County Color Cruise and Open Houses at A.A.Arnold House (aka Eastside Farmstead) and at Old Main.

Galesville is just north of La Crosse in Trempealeau County, at the junction of Highways 35, 54, and 93.