Warning: "continue" targeting switch is equivalent to "break". Did you mean to use "continue 2"? in /homepages/0/d168129058/htdocs/statetrunktour_site/wp-content/plugins/gravityforms/common.php on line 1261

Warning: "continue" targeting switch is equivalent to "break". Did you mean to use "continue 2"? in /homepages/0/d168129058/htdocs/statetrunktour_site/wp-content/plugins/gravityforms/common.php on line 1298

Warning: "continue" targeting switch is equivalent to "break". Did you mean to use "continue 2"? in /homepages/0/d168129058/htdocs/statetrunktour_site/wp-content/plugins/gravityforms/common.php on line 1302

Warning: "continue" targeting switch is equivalent to "break". Did you mean to use "continue 2"? in /homepages/0/d168129058/htdocs/statetrunktour_site/wp-content/plugins/gravityforms/common.php on line 1327

Warning: "continue" targeting switch is equivalent to "break". Did you mean to use "continue 2"? in /homepages/0/d168129058/htdocs/statetrunktour_site/wp-content/plugins/gravityforms/common.php on line 3442

Warning: "continue" targeting switch is equivalent to "break". Did you mean to use "continue 2"? in /homepages/0/d168129058/htdocs/statetrunktour_site/wp-content/plugins/gravityforms/common.php on line 3449

Warning: "continue" targeting switch is equivalent to "break". Did you mean to use "continue 2"? in /homepages/0/d168129058/htdocs/statetrunktour_site/wp-content/plugins/gravityforms/common.php on line 3462

Warning: "continue" targeting switch is equivalent to "break". Did you mean to use "continue 2"? in /homepages/0/d168129058/htdocs/statetrunktour_site/wp-content/plugins/ubermenu/core/sparkoptions/SparkOptions.class.php on line 754

Quickie Summary: State “Trunk” Highway 21 cuts across much of central Wisconsin, joining Sparta and Fort McCoy with Oshkosh and the Fox Cities. Used as a primary route for cross-state traffic, it’s the main street for several key towns and provides access to the Necedah National Wildlife Refuge, as well as both the Wisconsin River (which flows into the Mississippi) and Lake Winnebago (which flows into Green Bay to Lake Michigan and, eventually, the Atlantic Ocean.)

The Drive (West To East): Highway 21 begins in the Bicycling Capital of America, Sparta (pop. 9,522). Sparta is the western host of Fort McCoy, the eastern terminus of the La Crosse River Trail, and the northern terminus of the world-famous Elroy-Sparta Trail. It’s also childhood home of a famous astronaut and current home of the World’s Largest Bicyclist (more on that below.) I-90 and Highways 16, 27, and 71 also meet in Sparta.

Sparta’s traditional downtown runs along Highway 21, with shops and bikers lining the street. 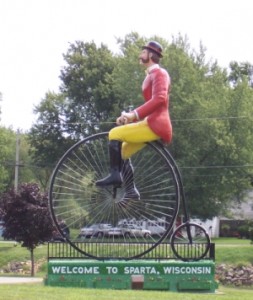 Ben Biken, Sparta’s bicyclin’ mascot, looks over Highway 21’s western start. He was manufactured locally by FAST Corp., which we’ll get to in a second. 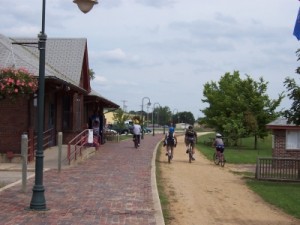 The Sparta Depot serves as a trailhead for the La Crosse River and Elroy-Sparta Trails. Here, a group of bikers begin the 32-mile trek toward Elroy.

On top of bikes, Sparta has a number of attractions. Some kids who grow up in Sparta leave for big cities; Deke Slayton left for Earth’s upper atmosphere. The Deke Slayton Memorial Space & Bicycle Museum honors the astronaut, native son, and head of NASA Operations from 1963 to 1972. 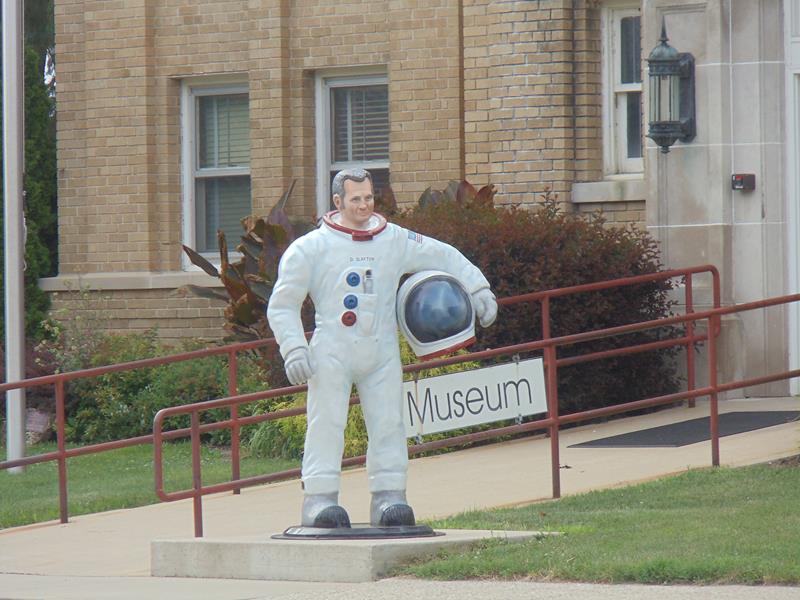 So, you know that fiberglass hippo? The one whose mouth you putt golf balls into while playing mini-golf? Chances are it was made in Sparta at the FAST Corp. (FAST stands for Fiberglass Animals Shapes and Trademarks.) FAST does business all over the world, and few companies like it exist. A drive into their lot yields a sprawling field filled with fiberglass fun: large cows, alligators, elephants that double as childrens’ slides… the list goes on. You may traverse the field and marvel at their creations, as long as you behave and don’t climb on anything. Their lot can be found by following Highway 21 to the northeast edge of town, at the junction with County Highway Q. Look for giant fiberglass things.

Fiberglass animals of all kinds, including this elephant hanging out in the pasture, dot FAST’s lot on the northeast side of Sparta. You are welcome to wander around and check out all the fascinating pieces, just be careful. Watch for wasps, which sometimes make nests inside the displays. Nobody needs somebody getting hurt, stung, or whining off to their lawyer. It is forbidden on the State Trunk Tour. 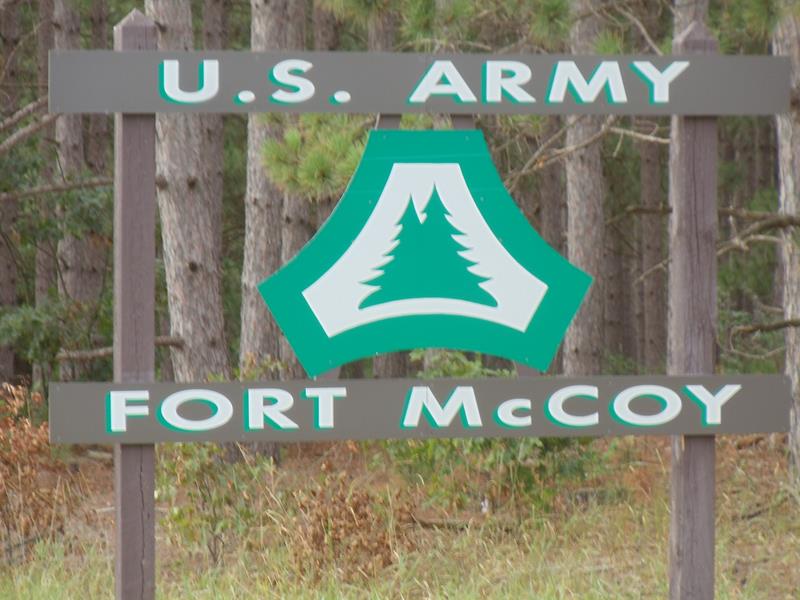 Highway 21 crosses a stretch of Fort McCoy between Sparta and Tomah. They encourage you to just keep driving… 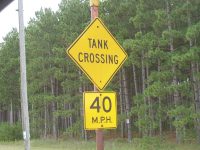 Northeast out of Sparta, Highway 21 follows the La Crosse River and then beelines it across Fort McCoy, a military reservation in service since 1909. Amidst a beautiful setting with valleys, coulees and hills, about 100,000 members of the military are trained here every year.

After a 5-6 mile straightaway, Highway 21 winds past Tunnel City and across the northern end of Tomah (pop. 8,419), which holds the Monroe County seat. Tomah itself sits right where the Driftless Area gives way to cranberry bogs and forests. Transportation has long been a hallmark of Tomah; it holds an Amtrak station for the Empire Builder and is where roads going through Wisconsin from Illinois to Minnesota tend to split. Pre-Interstate days, it’s where then-main roads U.S. Highways 12 and 16 split; when the interstates were built in the 1960’s, they decided to split Interstates 90 and 94 here as well. Highway 131 also starts here and makes a trek south through Wisconsin’s Driftless Area, an incredibly beautiful drive. Even shows of power congregate here: the Budweiser Dairyland Super National Truck & Tractor Pull is one of the largest in the country and takes place every June at the Monroe County Fairgrounds. Not coincidentally, lots of hotels, truck stops, warehouses and transport companies are located here. In keeping with the transportation theme, Gasoline Alley comic strip creator Frank King grew up in Tomah. The city’s downtown is south of Highway 21; just follow U.S. 12 south and when you reach downtown, it’s a pretty cool main street boulevard. Meanwhile, along Highway 21,you’ll find a plethora of gas stations, restaurants, hotels, and more at the busy junction with I-94. 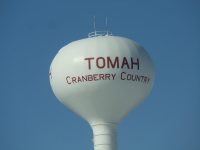 In addition to transportation, Tomah is known as one of America’s cranberry capitals. The world’s largest cranberry festival is held during late September in nearby Warrens, which also holds the Wisconsin Cranberry Discovery Center. Warrens can be reached by heading north on I-94 to County E, about 8 miles north of Highway 21.

You can see cranberry bogs for yourself along Highway 21 just east of the intersections with U.S. 12 and I-94.

East of Tomah, it gets more forested. Just past the junction with Highway 173, an angled road that sends you up towards Nekoosa and Wisconsin Rapids, you enter a busy area – for wildlife.

The massive Necedah National Wildlife Refuge covers 43,696 acres in the largest wetland bog in Wisconsin. Established in 1939, the Necedah N.W.R. hosts many rare or endangered species; the Refuge played a key role in the reintroduction of the whooping crane and the gray wolf. Over 110 species of migratory birds and 44 species of butterflies (did you even know there were 44 species of butterflies??) along with a variety of reptiles, amphibians, and several threatened species like the Blanding’s turtle all get to hang out here. Hiking, fishing and berry-picking are just some of the activities one can participate in at Necedah. 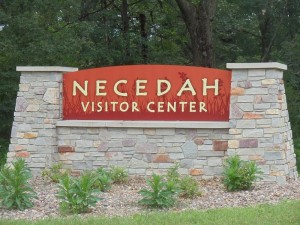 The Necedah National Wildlife Refuge can be accessed right off Highway 21. 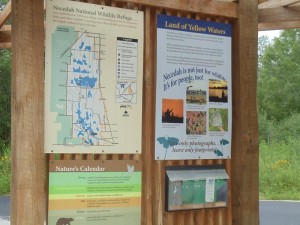 Necedah is known as the “Land of the Yellow Water” due to the Yellow River flowing through (and no, it’s not a book by I.P. Daily.)

Further along Highway 21 at the southeast end of the National Wildlife Refuge is the village of Necedah (pop. 916). Founded as an early lumber town on the banks of the Yellow River near Petenwell Rock, a popular climbing bluff, Necedah hosts a number of visitors from the National Wildlife Refuge as well as water lovers wishing to recreate on nearby Petenwell Lake. Petenwell Lake is a wide area of the Wisconsin River formed by a dam in 1948; it’s now the second largest lake in Wisconsin. The dam itself is just east of town along Highway 21, just past the intersection with Highway 80 downtown. Despite Necedah being home to NASCAR drivers Jim, Jay, Johnny, Tim and Travis Sauter, remember to obey the local speed limits. For something slower and more reflective, the Necedah Shrine (W5703 Shrine Road, 608-565-2617) is a Marian shrine officially called the “Queen of the Holy Rosary Mediatrix Between God and Man Shrine.” They welcome visitors with free admission and an Information Center that is open from 10am-4pm daily.

While plying the beautiful farmland and forests that characterize much of the drive from Necedah eastward on Highway 21, you will cross the occasional curious landform such as Ship Rock, described by some as “an isolated pinnacle of Cambrian sandstone” and as a “cool rock formation” by others. 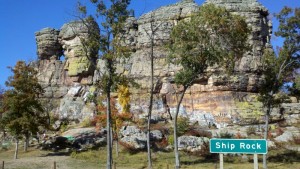 Ship Rock, one of the most eastern outposts of Wisconsin’s “Driftless Area” and a fun place to go rock climbing.

It’s a beautiful outcropping, marred in places by graffiti for no good reason whatsoever. But check out the angles, because from many of them the rocks do resemble a “ship-shape.”

Further east on Highway 21 we approach Wisconsin’s spine, the I-39/U.S. 51 highway. It tends to mark an unofficial boundary between the western and eastern halves of the state, and right where these two highways cross you’ll find little Coloma (pop. 450). Through history, Coloma has shifted to where the action is; it began four miles west of its present location where the stagecoach route once came through; when a railroad connecting Stevens Point to Portage was built in 1876, Coloma shifted over to where the rail was – its present downtown. U.S. 51’s original route came through on Main Street; today’s U.S. 51 & I-39 run through within a mile of Coloma’s main crossroads now, meaning the town could stay put. The original location four miles west is now known as “Coloma Corners.”

A little-known, under-studied but significant feature on the landscape a few miles south of Coloma is the Glover Bluff Meteor Crater. This impact crater, estimated to be less than 500 million years old (you know – give or take), is five miles wide and is exposed at the surface. However, natural plant and tree growth coupled with quarrying for dolomite rock means the crater itself tends not to be uber-noticable. However, scientists and researchers are starting to recognize the need to study this crater in more detail, and we’ll keep you posted if becomes something where a visit will reveal something cool. 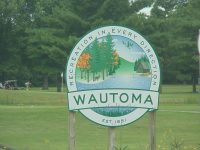 Continuing east from Coloma on Highway 21, you angle through Marquette County into Waushara County, heading east-northeast through the “sand hills” into Waushara’s county seat, Wautoma (pop. 2,218). The city bills itself as the “Christmas Tree Capital of the World” due to a major tree-growing farm that established in Wautoma in the 1950s. Highways 22 and 73 also converge here; Highway 21 joining 73 for a brief ride north into the city’s downtown before angling southeast. A brief offshoot is Highway 152, which runs for seven miles to Mount Morris and the Nordic Mountain Ski Area.

** Drive-In Alert **
On the east side of town along Highways 21/73, Wautoma offers an old fashioned drive-in, the Milty Wilty. Open since 1947, the Milty Wilty (920-787-2300) is known for delicious old-school burgers, hearty yet light milkshakes, ice cream, and just all-around fun.

The rest of Highway 21 from Wautoma to Oshkosh is coming soon!

West Terminus:
Can connect immediately to: Highway 16, Highway 27,  Highway 71
Can connect nearby to: I-90, about 2 miles east via Highway 16