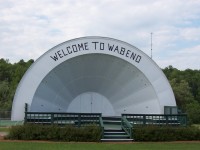 Driving along Highway 32 through Wabeno? You can’t miss Larry the Logroller, a 22’4″ lumberjack who serves as this town’s answer to Paul Bunyan. Instead of an ax, Larry brandishes a logging tool. He stands guard over the Wabeno Logging Museum and a 1901 Phoenix Log Hauler, a steam locomotive that once helped haul logs out of town. In the city park where he stands, you’ll also find a bandshell, a mini-amphitheater, and picnic areas along the North Branch of the Oconto River, which runs right behind Larry (apparently, that’s the river in which he would do his logrolling.)

Wabeno is a town of about 1,200 in Forest County which likes to claim a title of “Dual Sport Capital of the World” based on the active ATV and snowmobile use in the area – it’s in the heart of a very extensive trail system. But the town’s history is based on logging; it’s in the heart of the Chequamegon-Nicolet National Forest. Wabeno’s high school nickname is the “Logrollers” and Larry is their mascot – they just don’t bring him to football games. He’s tough to carry around. 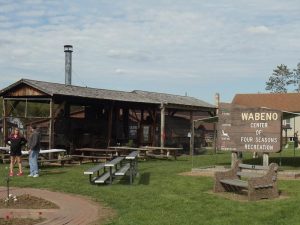 Before the 2013 repairs, Larry DID seem to slouch a bit…

Ironically, Larry the Logroller had to be repaired and reinstalled in 2013 when a log rolled on him, in a sense – a tree fell in a storm and damaged his fiberglass body. He once again stands guard over the town.

By the way, if the Phoenix Log Hauler on display is of interest, this is what it looks like when it’s just running around:

So basically, while you’re traveling through Wabeno there’s something cool to stop and check out: Larry the Logroller and his logging museum. And the train. And it’s a nice city park in general. Highway 32 goes right past it, and Highway 52 begins about a mile away on the northwest edge of town, connecting to Antigo and Wausau.