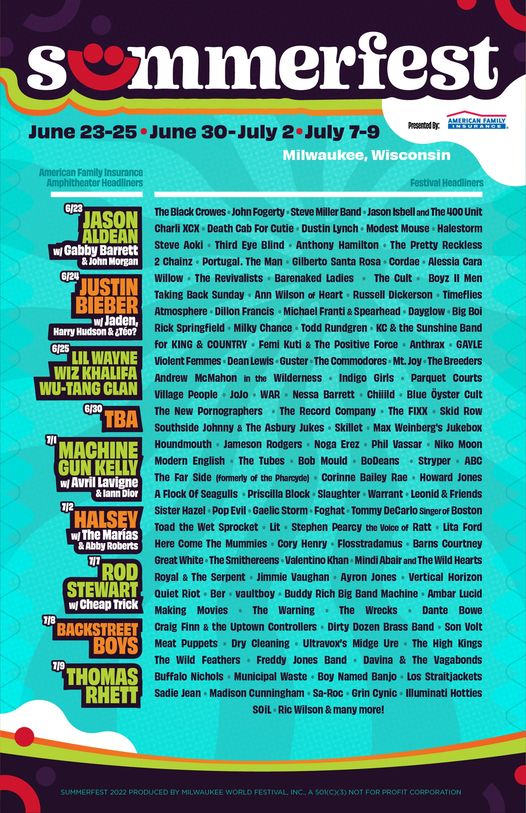 Summerfest 2022 brings the “World’s Largest Music Festival” back to Milwaukee’s lakefront in the middle of summer! We’re talking 9 days across three long weekends packed with concerts and fun with over half a million of your closest friends. Choose from over 800 acts across 12 stages on the 75-acre Maier Festival Park grounds. The dates are June 23-25, June 30-July 2, and July 7-9, 2022. There are, at this time, no COVID protocols needed this year.

Summerfest dates back to 1968 and has since become a key venue for the music industry’s hottest stars, emerging talent and local favorites to create unforgettable live music experiences in a world-class festival setting. Running along Milwaukee’s lakefront nestled within downtown, the Historic Third Ward, Discovery World, I-794, and Lake Michigan, Summerfest offers not only music but over 45 food and beverage vendors, four marketplaces offering crafts and wares from all over the world, interactive exhibits, and just cool general fun. The new Northwestern Mutual Community Park includes a Children’s Stage and play area that offers a fun experience for the kids. Regular shows involving magic, singalongs, and other activities are complemented with plenty of equipment kids can run, swing, climb, and play on. During the day, Summerfest is designed to be very family-friendly. Many of the food and beverage vendors are classic and popular restaurants and bars from around the Milwaukee area, and selections range widely from ethnic food options to a wide variety of craft and classic beers. Several stands also have a full bar with wine and spirits. Check out the latest music and stage lineups below!

Single Day General Admission Tickets run $25 per day, you can print them at home or put them on your mobile. These tickets are good for the entire grounds and any show with the exception of the American Family Insurance Amphitheater shows. Seniors 62 nd over and Children 3-10 can get discount tickets at the gate. Children 2 and under are admitted free. Multi-Day Ticket options include:

Parking lots are available just to the west of the grounds and throughout downtown Milwaukee and the Historic Third Ward. The Milwaukee County Transit System also offers “freeway flyer” express buses to and from the grounds from numerous Park & Ride lots in the metro area. The Summerfest Grounds can be accessed directly via I-794, U.S. 18, and Highway 32. I-43/94 and Highways 38, 59, and 145 also bring you within a mile of it – which is how far away some people park! Either way, it’s one of the greatest music festivals on the planet and a definite State Trunk Tour recommendation.