Racine now has a brewpub. The Reefpoint Brew House is perched above Racine Harbor in the downtown area and serves up a variety of Wisconsin craft beers, including some of their own recipes like the Belle City Ale. The restaurant offers an extensive variety from brunch to nice dinners.

You’ll find Reefpoint on Christopher Columbus Causeway, wedged between downtown Racine and the lakefront in full view of the boats in the harbor. Highways 11, 20, 32, and 38 are all within blocks. 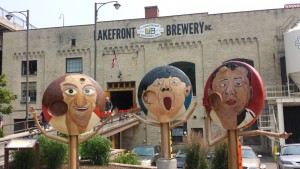 From old-school biplane skywriting to today’s military jets screaming across the sky, Milwaukee’s lakefront is packed and fun right now. Hit U.S. 18 or Highway 32 and you’ll see and hear it before you even get there!