The Gobbler is an unusual building: a circular, Jetsons-esque design made to appear in the shape of a turkey from above – even the roof over the entrance was designed to represent a turkey’s neck. This place opened in 1967 as a restaurant, lounge, and hotel. Its location along I-94 at Highway 26 quickly helped make it a meeting spot for those coming from Milwaukee and Madison – and many legends surround some of those meet-ups. You can read a hilarious critique and review of the old Gobbler here. A bigger, extensive salute to the Gobbler can be found on this blog, featuring tons of links and pictures. 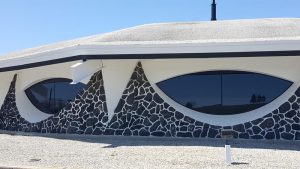 The hotel is long gone and the restaurant had closed for over a decade before the original space was transformed – with many of the better original elements preserved – into a new entertainment venue now called The Gobbler Theater. Opened in December 2015, it’s open for concerts and at various other times to see the building, have a drink, and discover the history. Call them at (920) 699-0003 or visit their website here for updates and details.

The Menomonee Park Zoo is set on 8 acres in a beautiful location on the shores of Lake Winnebago. Open from early May through late September, the Zoo features nearly 50 varieties of animals and exhibits, including permanent exhibits for Gray Wolves and North American Elk. The zoo is bordered by Lake Winnebago on the East and Hazel and Merritt Streets on the South and West; U.S. 45 is just to the west. Highways 21, 44, and 76 are close by.