The General Douglas MacArthur statue stands in Milwaukee’s Veterans Park to honor this famous military general, who lived in the city for part of his life and claimed the city as his hometown.

General Douglas MacArthur remains one of the best-known and revered generals in the history of the United States Armed Forces. The man who led the Allied forces in World War II was born in Little Rock, Arkansas in 1880 but lived in Milwaukee during his high school years, a reflection of his family’s longer history in the city. Growing up in a military family and then going into the military himself, MacArthur lived in and based out of many places throughout his life, but he always referred to Milwaukee as “his old hometown.”

After emerging victorious in World War II while accepting the surrender of Japan aboard the USS Missouri on September 2, 1945 and overseeing occupation of that country for six years (plus initially leading the United Nations Command at the start of the Korean War), MacArthur returned to the United States and toured the nation. On April 27, 1951, MacArthur’s tour went from Chicago to Milwaukee, with more than one million people greeting him along the way and in the city. This article from the Milwaukee Journal Sentinel chronicles that visit.

MacArthur Square, on the west side of downtown, was named in his honor in 1945 during the Milwaukee Civic Center’s redevelopment; the General Douglas MacArthur statue was originally erected there in 1979. In 2014, with full military honors, it was relocated to Veterans Park in 2014, giving MacArthur’s statue a lake view and a spot adjacent to the Milwaukee County War Memorial and the Milwaukee Art Museum.

The General Douglas MacArthur statue stands 9.5 feet tall, putting him on a marble pedestal. It’s a full-figure portrait of MacArthur, with his hands in his back pockets, now looking out over the water. 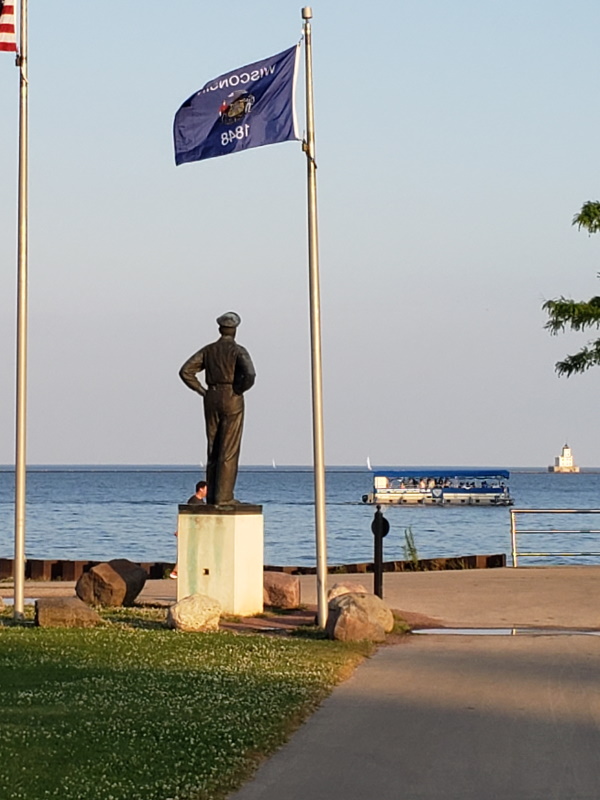 General Douglas MacArthur statue, overlooking Lake Michigan in Milwaukee. Originally erected in the city’s MacArthur Square in the Civic Center in 1979, it was moved to this location in Veterans Park in 2014.