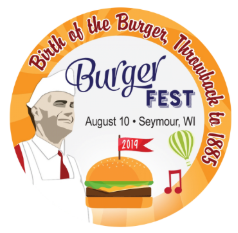 Seymour Burgerfest & Balloon Rally celebrates the “Home of the Hamburger”! Seymour is where the hamburger was reportedly invented by Charlie Nagreen in 1885, improvising the sandwich while selling meatballs at the Outagamie County Fair. Burgerfest celebrates this momentous creation with a big Balloon Rally Friday night, the World’s Largest Hamburger Parade, the Bun Run, Kids’ Run, music, kids’ games, the Burger Eating Contest and the Giant Ketchup Slide! The Car Show, Railroad Depot and Community Museum are included with the Saturday entrance fee.a 190-pound hamburger they grill up right there, the burger-eating contest, and you can even take a plunge on the ketchup slide!

The Car Show, viewing the model railroad at the Railroad Depot, and seeing the world’s largest hamburger memorabilia exhibit at the Seymour Community Museum are included with the Saturday Burger Fest entrance fee. Downtown Seymour Saturday events cost only $3 in advance and $5 at the gate. Children 12 and under are admitted free with paid adult on Saturday downtown. Wristbands are available from Seymour merchants Don’s Quality Market, Seymour Public Library, Seymour Community Museum. Or, get your Tickets in Advance here.

During a previous Burgerfest, Seymour celebrants cooked up the World’s Largest Hamburger – according to Guinness – at 8,266 pounds!

The State Trunk Tour has been there; amidst the bands, the model railroad museum and hungry and thirsty festival goers milling about under the statue of Charles “Hamburger Charlie” Nagreen (the hamburger’s inventor), was the main attraction: a 60-pound hamburger. Sure, it’s a fraction of the monstrous 8,266 pound record grilled in 2001, but it was still a monster.

The 60 pound mound of meat, hot off the grill.

It took some work, but the meat was successfully wedged within a gi-normous bun – even though part of the patty’s north side fell a bit!
Check out all the fun where Highways 54 and 55 meet in Seymour!