The Milwaukee Air & Water Show, sponsored by Waterstone Bank, offers one of the top air shows in the Midwest along the city’s gorgeous lakefront. Yhey’re proud to announce once again the Grand Return of the U.S. Air Force Jet Demonstration Squadron – the “Thunderbirds,” aka “America’s Ambassadors in Blue.” 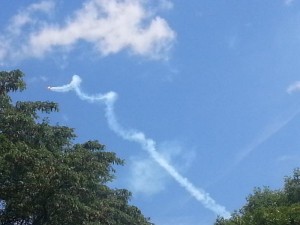 An “M” for Milwaukee at the Milwaukee Air & Water Show we snapped from Back Bay Park on Milwaukee’s East Side.

On the waters of Lake Michigan, check out the USCGC Bristol Bay (WLB), a 225-foot multi-mission buoy tender out of Detroit; a NEW Water Show act from Milwaukee’s own Dennis Pinter, who will demonstrate the “Air Chair” on the water! Daredevil and Pro Flyboard competitor Casey “Swizzle” McElwee will also perform with his Hydroflyte and Flyboard act. You can also check out the Milwaukee Fire Department’s “Trident Fireboat,” which will demonstrate its capabilities on the water, and witness an HH-60 Jayhawk Rescue Helicopter Air-Sea Rescue Demostration courtesy of the U.S. Coast Guard Air Station out of Traverse City, Michigan.

You can watch from Bradford Beach and many other areas along Milwaukee’s lakefront for free. Ticketed areas offer the closest proximity, the best views, hosted narration, the best access to concessions, and great seating. This is definitely a benchmark summer event in Milwaukee! U.S. 18, Highways 32, 36, 38, 57, 59, 145, 190 and more all bring to within eye (and definitely ear!) shot of the show.