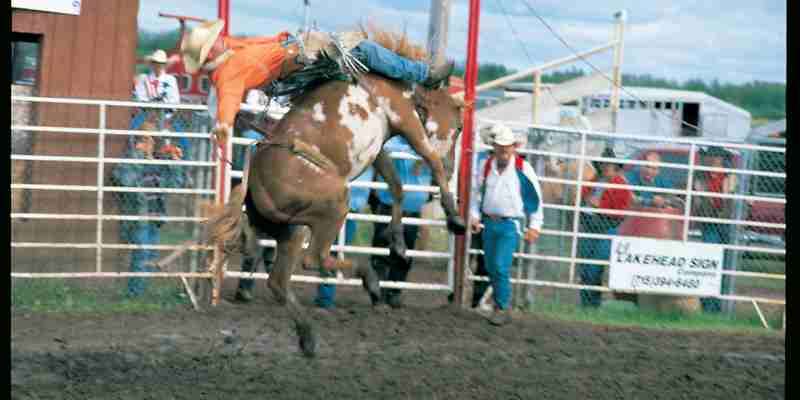 U.S. 2 and 53, and Highways 13, 35, and 105 bring you to Superior. Yee-ha!! The Great Northern Classic Rodeo takes place on the Douglas County Fairgrounds, right along Highway 35/Tower Avenue.

Tickets for the Great Northern Classic Rodeo are $14 in advance, $15 at the gate, $16 for reserved advance seats for adults; kids 6-12 are $7 in advance, $8 at the gate, and kids 5 and under are FREE. Seniors (65+) and Military have additional discounts, get details and purchase tickets here.

Bareback Bronc Riding   The rigging is a wide leather belt that fits around the horse’s midsection, just behind its shoulders.  The rider holds onto its stiff leather handle and leans back as far as his arm will allow while positioning his heels over the horse’s shoulders for the first jump out of the chute.  This is called “marking the animal out.”  The rider’s free hand cannot come in contact with the horse during the 8-second ride.  Each time the horse kicks, the cowboy brings his knees toward his body, keeping his heels against the horse and his toes turned out (called “spurring), then stretches his legs out again.  SPONSORED BY BARKERS ISLAND INN

Saddle Bronc Riding   This requires the cowboy to sit upright in a saddle on the horse, holding onto a buck rein that is attached only to the horse’s halter and move his legs from the knees down in a back-and-forth motion resembling the movement of a rocking chair.  His feet must remain in the stirrups with his toes turned out.  He must mark the horse out by keeping his heels in the well of the horse’s neck on the first jump and may not touch himself or the horse with his free hand.  The most physically grueling of all the rodeo events.

Breakaway Roping   This requires the contestant to rope a calf in the quickest time, with the rope breaking away from the saddle horn when the calf is caught and pulls the “slack” out of the rope.  The catch is considered clean if it passes over the calf’s head and is pulled taut anywhere on its body-even one heel!  Times can often be as quick as just a few seconds.  A barrier is stretched to allow the calf a “head start” and 10 second penalty applies if the cowgirl starts too early.

Steer Wrestling   The object of steer wrestling, also called “bulldogging,” is to lean onto the back of a steer, catch it from behind the horns, quickly slide from the horse to the ground to stop the steer’s forward momentum and wrestle the animal to the ground with all four of its legs pointing in the same direction.  The bulldogger is assisted by a hazer, who rides along the right side of the steer to keep it running straight.  The hazer is extremely important and can play a great part in whether the rider “gets down on his steer.”

Barrel Racing   A speed event where times are measured in thousandths of a second with electric timers.  Barrel racing is set on a cloverleaf pattern marked by three 55-gallon drums placed on the two sides and far end of the arena.  Beginning and ending from the same point, the rider goes first to either the right or left barrel, circles it, crosses to the other side and circles that barrel, rides to the far barrel and circles it, then rides full speed back across the starting line.  At one world’s final rodeo, the world title was decided by 1/100th of a second in the last run of the last performance! SPONSORED BY BERNICKS PEPSI

Team Roping   A header ropes the animal (around both horns, the neck or half the head) and wraps the rope around the saddle horn (“dallying”) to tow the steer and position it for the heeler to rope both back legs (roping just one leg earns a five second penalty).  The contest is not over until the heeler catches the legs and dallies, the header has turned to face the heeler, and both ropes are tight.  This action is used often on ranches to this date; it allows a steer to be handled in the open pasture if it has been injuried and needs to be doctored or branded.

Bull Riding   Holding a flat, braided “bull rope” that has been placed around the animal just behind its shoulders, the cowboy threads one end of the rope around his gloved hand and pulls it taut.  During the ride, he tries to keep his body close to his hand with his legs slightly forward toes out and heels planted firmly in the bull’s side.  However, the loose hide generally found on rodeo bulls makes them extremely difficult to ride and the size of these animals magnifies the possibility of injury.  The rider cannot touch his free hand to himself or the bull during the eight second time, and as in bronc and saddle riding, two judges score his ride and the performance of the animal.  SPONSORED BY FOND-DU-LUTH CASINO.