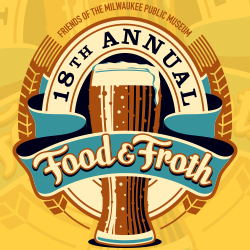 Food & Froth will feature over 200 different beers from more than 70 breweries, including Midwest treasures such as Summit Brewing Co., which is making its Food & Froth debut, and international favorites like Germany’s Krombacher Brauerei. Nibble on tasty bites from Screamin’ Sicilian frozen pizza, sampling a fully loaded pizza perfect for pairing with beer, as well as many other treats from local restaurants and caterers. Additionally there will be live music on all three exhibit floors, including a performance by The Whiskey Belles.

Food & Froth tickets are $75 for members and $125 for VIP tickets. VIP tickets include 5:30 p.m. entrance into the special VIP room filled with exclusive craft beers, a smorgasbord of unlimited savories and sweets, and 6:00 p.m. early entry into the event.

Tickets are available by calling (414) 278-2728 or (888) 700-9069 during museum hours. Admission fee covers all food, beer and live entertainment. You must be at least 21 years of age to attend, and a valid identification and ticket are required for entrance into the event.

Proceeds benefit the Museum’s exhibits and educational programs. Get all the details here!